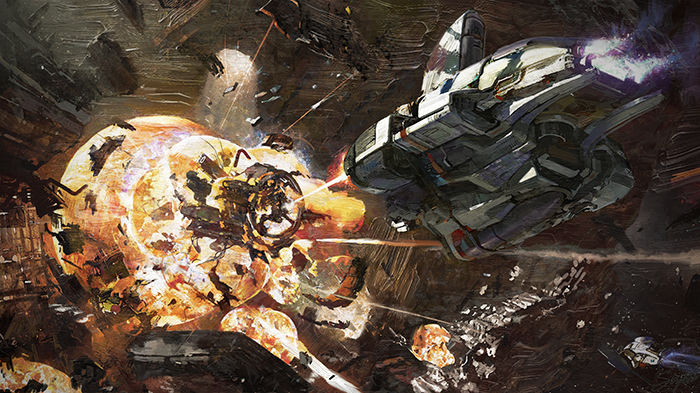 Star Citizen backers have been practicing patience while Cloud Imperium build the backbone of their all-encompassing space sim. But a breakaway team already have something on Steam, just six months after their Descent reboot narrowly cleared its Kickstarter goal (leaving explosions in its wake, presumably).

Underground brings six degrees of freedom to first-person space combat, which has nothing to do with Kevin Bacon and everything to do with spectacular high-stakes battles in warrenlike asteroid mines.

Trench runs not your jam? Explore the void in one of the best space games on PC.

Descendent Studios have opened up the Early Access release to every Kickstarter backer with a Descent site account, having already allowed higher tier fans to fly about in the beta. They’re asking for a not-unreasonable £19.08 from newcomers during Underground’s first week on sale.

The reimagined ‘90s FPS currently holds three ship classes, several weapons, and five map / game mode combos. New seams will be mined over the course of the next several months, in line with early feedback. The team have already abandoned a planned microtransaction model in favour of larger expansions.

“Fans have spoken and we listened,” said Descendent CEO Eric Peterson – formerly Star Citizen’s ‘Wingman’. “Buy once, play forever is the course they wanted, and one we fully embrace.”

We talked to Descendent about planned VR in Descent Underground, as well as the timeless appeal of the inside of an asteroid,a few months back.

The finished shooter is expected in early 2016 on Windows, Mac and Linux. Think you’ll be winding your way around its warrens?