Getting food in your stomach and fuel in your hoverbike are your two priorities in Oscar Brittain’s debut, Desert Child – an explosive action-racing game. You play as a young hoverbike racer who’s trying to scrape enough money together to enter the biggest race in the universe, the Grand Prix. On Mars.

You’ll need to race your way to the top through skill and upgrading your bike with new tech. The problem is that you’re hungry, broke, and your current bike is a heap of junk.

You’ll have to earn your money through back alley dealings, bounties, hacking computers, delivering pizzas, throwing races, and anything else you can think of to get a quick buck.

In the trailer and vibrant screenshots you can see echoes of other sci-fi media. Desert Child has the scrappy ruggedness of Cowboy Bebop, the gritty races of Akira, and Redline’s vibrant pops of colour. We spoke to Desert Child’s one-man team about how these inspirations influenced the way he constructed the world and visuals of Desert Child.

PCGN: What’s the main story of Desert Child? How does hoverbike racing fit into the world?

Oscar Brittain: In the year 2071, Earth is a real hole. Things are so bad that the government actually subsidises tickets off the planet. The people who stay are like ultra libertarians who take advantage of lax law enforcement to organise dangerous hoverbike races. This is where you come in. You’ve inherited your grandfather’s vintage hoverbike, and you only need $500 to get to Mars.

Hoverbike racing is a huge sport in the solar system, ever since a lunar mining accident led to the banning of all robots in dangerous occupations. Overnight, there was a surplus of hardy drones, and the people of Earth wasted no time integrating them into their races, with the robots providing the perfect moving targets for scoring points.

So, you begin the game having just quit your job at Pablo’s Brewery, and hungrily trying to scrape together more than just a living by winning the Martic Grand Prix – the biggest race in the Solar System. You need to get to Mars, then take whatever work you can stomach to earn the $10,000 entry fee. How you do that is up to you. You can strictly focus on races, take odd jobs from the notice board, or offer your unique skills to the more unscrupulous citizens of Mars. 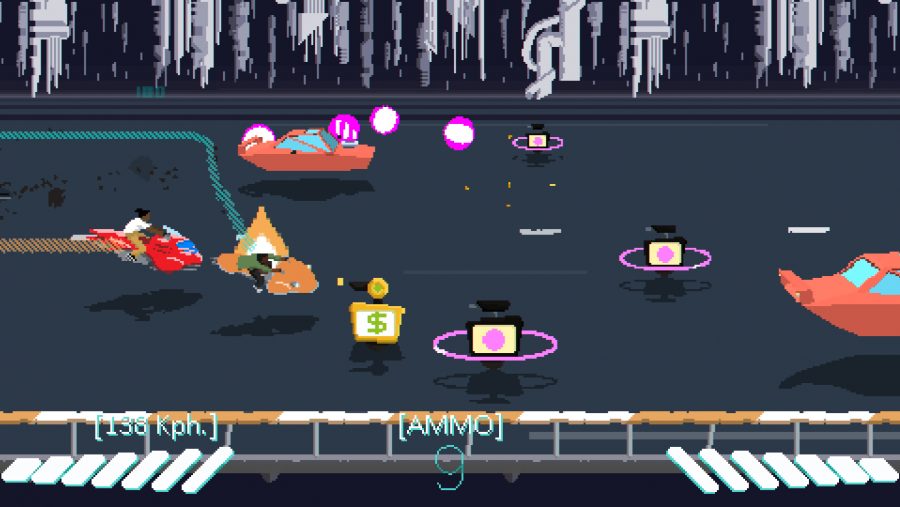 You’ve taken inspiration from the likes of Akira, Cowboy Bebop, and Redline. What it is about these shows that drew you to them?

Cowboy Bebop had such a huge effect on me. It’s one of those shows that just speaks to teenage boys, I think. But the meticulous design of the world and the fact that it’s actually quite a hard sci-fi setting really spoke to me. You’re really thrown into these characters and the world they inhabit, and halfway through their stories. So you just join the dots a lot of the time, and I think that’s part of why it holds up to so many repeat viewings – you notice something new each time.

Akira and Redline both have phenomenal animation – the way they convey speed and weight is something I’ve never seen anywhere else. Akira has a similar vibe to Cowboy Bebop, in that the story is very much underway by the time you enter that world.

Redline was what inspired me to make the game’s story and slower moments act as a counterpoint to the fast-paced races. Redline’s pacing is so peculiar, but by the time the credits roll, you understand why it’s needed to build up the final race so much. In addition, the relationships between all the characters in Redline were something I wanted to take as a base for some of the illegal jobs you can take in Desert Child. 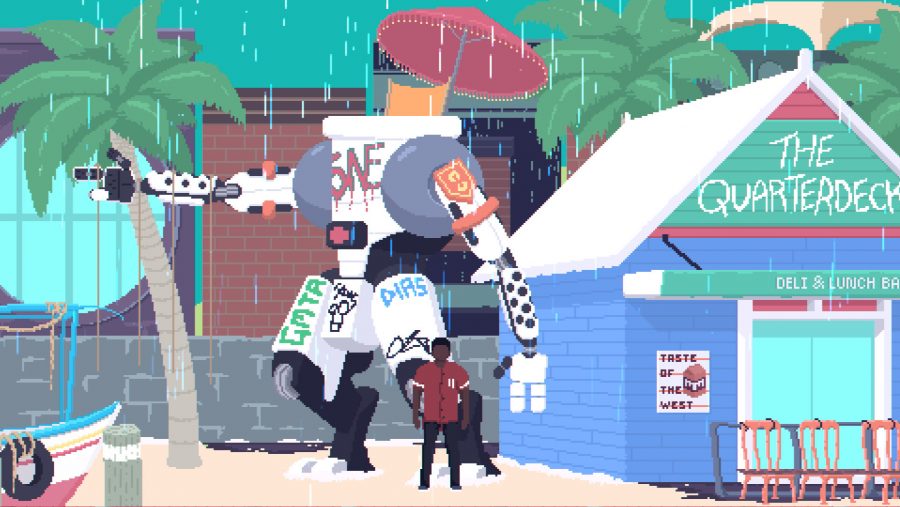 How do these influences come through in Desert Child?

The cultural mish-mash of Cowboy Bebop always inspired me. I wanted to take Fremantle, where I live, and just dial its more exotic elements all the way up. I wanted there to be a big Italian influence on Mars, like how Cowboy Bebop had a strong Middle Eastern feeling at times. But there are a multitude of little references to different ‘junky’ parts of cultures I like. I tried to make the game a sort of ‘look into the back streets’ of cities like Perth, Tokyo, and Jakarta.

Redline and Akira had big influences on the way I portrayed speed and flow during races. The boosting effects in the game were something I copied almost directly from Redline, with the screen actually compressing and distorting as you gain speed. Akira’s opening, with the kids riding their bikes through the city, inspired the flow and the trails behind the hoverbikes of Desert Child. I spent a long, long time getting the trails to hang and move dynamically to give a sense that you were shifting a weighty bike around, not just moving a cursor across the screen.

It’s interesting how the player’s visual perspective changes as you walk around the city. How did you think of that idea?

Cowboy Bebop: The Movie has so many great montages of the city on Mars, and that was the main impetus behind the alternating camera angles in the quiet sections. I wanted to try and create a playable montage, in a way. The way the film is almost excited to show off all the different cultures and aspects of daily life in its city is something I’ve only seen in one other film, and that’s Tekkonkinkreet, which was another influence.

Also, my favourite Final Fantasy game is VIII, and I still boot it up every few months and just walk around the town of Balamb. It’s this super chill little coastal village that reminds me of home. I really based a lot of the pace of walking around Desert Child on Balamb, with its random little shops and people. Being of the mid-‘90s it was all pre-rendered 3D backgrounds, which still look great today, and really add a sense of a director’s hand to your exploration. I appreciate when a game really wants me to experience something in a particular way. 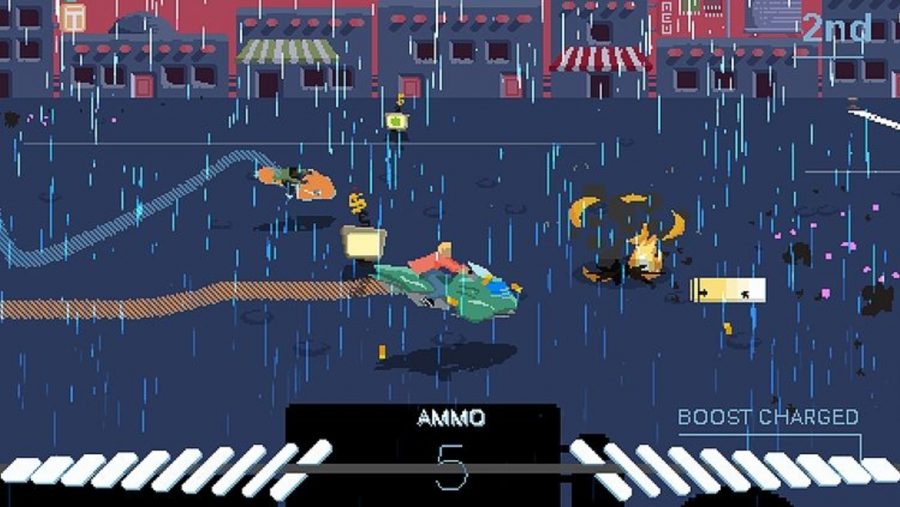 Lots of small, refined details have gone into the world of Desert Child. Avoiding spoilers, how did Earth reach this vision of the future?

I can’t really spoil it – it’s on the news every day! It was mostly just the usual suspects, but I tried to avoid the classic ‘this one big thing happened and changed everything’ trope. I even go out of my way to comment on how good we are at getting over ‘big’ things, with the inclusion of a subplot involving the discovery of alien life, to which most people shrug and get on with their lives.

A big part of my worldbuilding process is trying to bring forward as many contemporary elements as I can, and trying and integrate them into the fiction. So in Desert Child, people still read newspapers, and build in classical architectural styles, because there are some things in our culture that are timeless.

I find it uncomfortable and distancing when everything is just bathed in neon lights, or everyone owns a flying car. It always leaves me with the question, ‘What happened to all the old muscle cars? Did we all start hating the past?’ If there’s one thing I know about humans, it’s that we freaking love the past, and even if we had to move to another planet to survive, I think we’d almost go out of our way to retain our old ways.