It’s technically a prequel to the original Desperados, but Desperados III is also the spiritual successor to Shadow Tactics: Blades of the Shogun. If you played Mimimi Productions’ previous stealth-action game, then you are far more prepared for this Spaghetti Western romp than you would be by knowing about the future adventures of protagonist John Cooper.

You’d also probably have your expectations set pretty high, considering Shadow Tactics was a landmark entry into a genre that’s become more and more niche through the passing of time. But rest assured: Desperados III is a worthy successor to Mimimi’s classic.

Desperados III is a stealth strategy or tactics game, but it also resembles more a crossword or sudoku puzzle to me. When your party is tucked in a bush, watching guards trot in predictable yet tightly regimented patrols, assessing the battlefield feels like scanning rows or columns for one stray number to betray the rest of the cipher. These moments can linger as you take account of every guard’s view-cone, possible noise trigger, or environmental objects that could give a leg-up.

You find what looks like an opening, muster some courage, and execute, only to be promptly foiled by that one thing you didn’t spot. This sort of trial-and-error scenario can get frustrating, and your ability to push through it is directly proportional to your gluttony for being exposed as a sloppy imbecile over and over again. 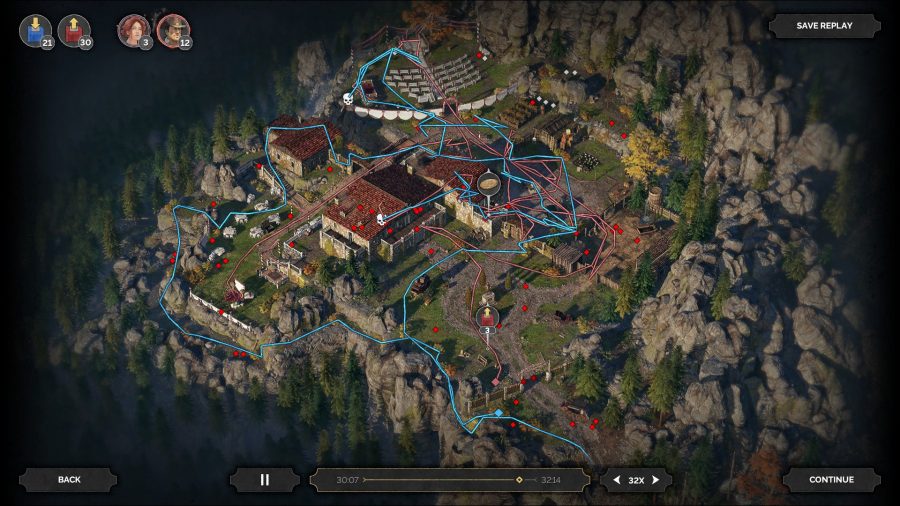 As you recruit more characters, and progress further into the 30ish-hour adventure, taking multiple breaks to collect yourself in one level can become standard procuedure. I can’t count how many times I’ve had to leave the game for an hour or so, after bashing my head against a tough encounter for as long, just to get some fresher eyes on it later.

All this struggle feels worth it when your plans come together. You truly feel brilliant when you’ve lured a guard through a narrow gap in patrols, to incapacitate him and hide the body right before his boss shows up to check on him. There’s a Hitman-esque quality to completing stages and adapting to fluid objectives in any clever way that you can come up with. This adds to that sense of contentment upon completion – not only did you win, but you did it your way.

More like this: the best western games on PC

This sense of satisfaction comes from the limitations on your creativity as much as the possibilities. You can’t pick up briefcases and toss them at the nearest foe. Your colourful cast of characters all have unique abilities that help you navigate the world, control crowds, and kill your way to the objective. Generic cowboy Cooper can toss a fake coin to distract enemies, or wield a brace of pistols and put lead into two different targets at once. Kate, a pretty and tough farmer’s daughter, can dress up in disguises and flirt her way into buildings that the rest of your cast couldn’t get into. My favourite, Isabelle, uses voodoo to control enemies’ minds and turn them on each other. 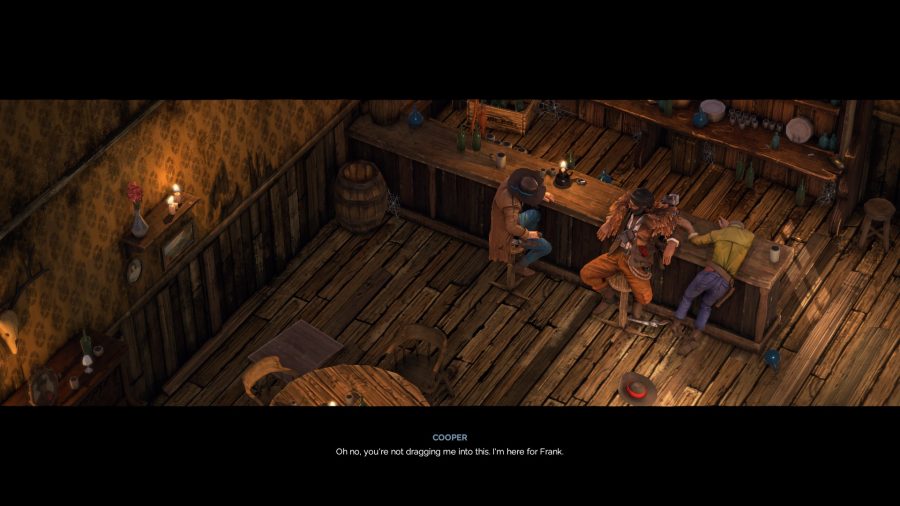 They all seem largely random in isolation, but the ways that all of Desperados III’s character abilities interact with one another can create some truly ridiculous series of events. They are all meaningfully different mechanically, and each grants a level of dynamic versatility to the others that is sorely missed when you’re forced to play without some of them.

Mission variety is vast for a game like this, as well. I found that every mission tests you in a unique way. Sometimes this is in adding new mechanics, like leaving footprints in deep mud that enemies can track you with. Other times, it’s by splitting your party up, or making you gather and rescue certain members during the course of the mission. Not every stage feels like you’re doing something different, but it always feels like you’re doing it a different way. 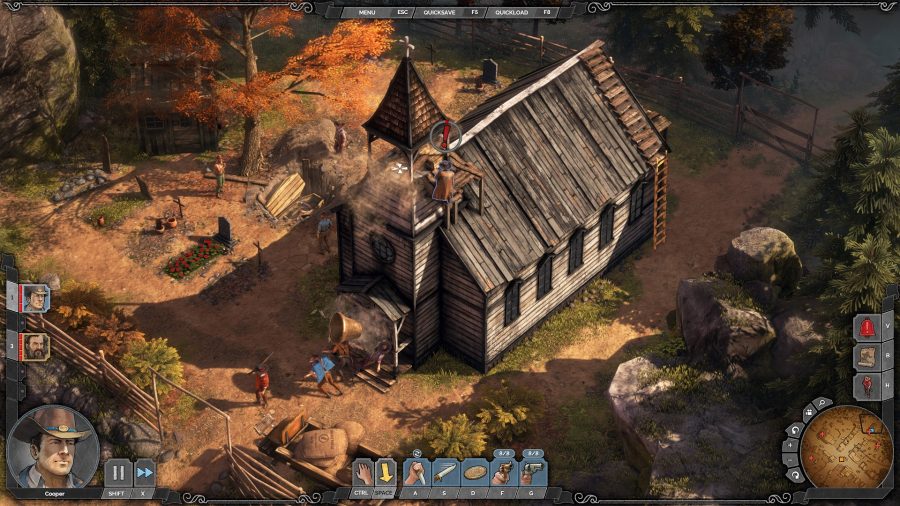 Missions can change dramatically from objective to objective, too. After sneaking around a compound in search of dynamite, you use it to blow up a railroad bridge so that the local gang can’t harass Kate’s uncle anymore. What was a covert theft turns into a run-and-gun shootout after the explosion puts their entire base on alert. These objectives pull no punches when it comes to keeping you out of your comfort zone. On top of that, there are a ton of optional badges and achievements to earn in each mission, adding a lot of replay value for the truly ambitious cowboy.

Enemies themselves are relatively one-dimensional, and come in only a handful of types that are increasingly harder to distract and dispatch. But its their cunning placement – as well as their sheer numbers – that make them a truly devious foe. They’re not brilliant, but they act reliably, and it often seems like every single guard is being closely watched by a friend at all times. When the peace is broken and the alarm is raised, you are almost always outgunned, and will never win a straight up shootout versus them. If they see a body you forgot to hide and raise the alarm, they often summon even more gunmen to patrol the area in search of you. The amount of bodies that can pile on after slipping up can feel cheap at times, even if you do manage to finish your objective. 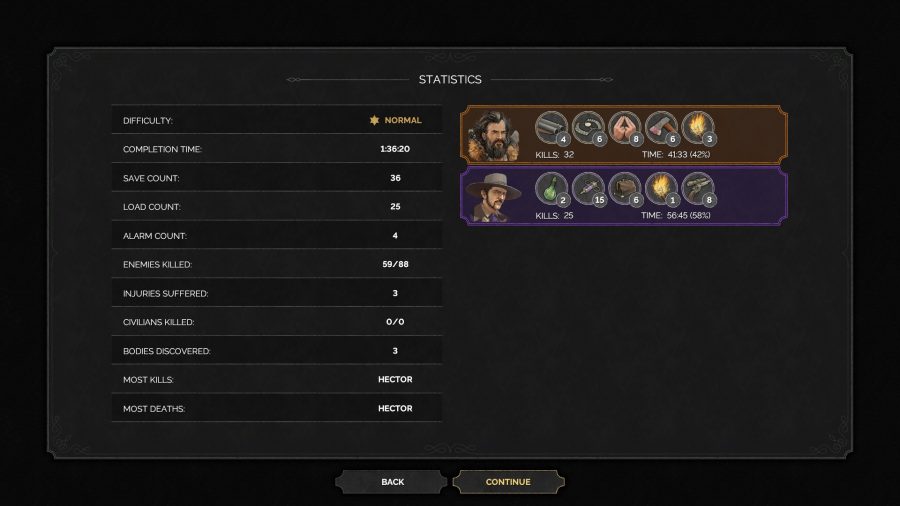 The story feels a bit low-effort as well. The plot is almost entirely made up of Western tropes done the way they’ve always been done. The characters themselves quip back and forth in entertaining fashion, but neither the dialogue nor broader story rises much past simply being a framework upon which to hang mission objectives. As this game is pretty long and claims to be ‘story-driven’, its weak narrative is a bummer that’s hard to ignore. This is no Red Dead Redemption.

That said, I doubt that you’ll find a stealth tactics experience more robust and rewarding than Desperados III this year. This deviously challenging game finds new and clever ways to challenge your tactical acumen in every mission. When its demands seem at their peak of difficulty, the mechanical expressiveness and freedom of your party’s combat abilities reliably provide just the right tools to help you emerge victorious from any scenario, given a little creativity – at which point, you’ll feel like the smartest person to ever play a videogame.

This is an excellent stealth tactics game that offers a lot of freedom of action, but drags a little in the narrative department.