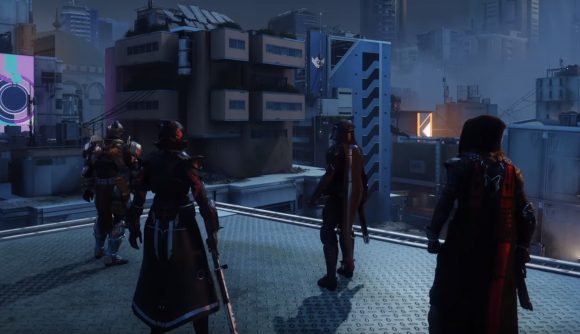 The Black Armory is the first part of the updates, a new faction that tasks you with hunting down and reigniting new forges to claim new weapons. These battles serve as a sort of horde mode, and you’ll be able to matchmake into the relevant activities. Volundr Forge opens on December 4, the Gofannon Forge on December 7, and the Izanami Forge on December 18.

Each forge offers new weapons inspired by the Norse, French, and Japanese family lines that built them. The latter is a sniper rifle with a four round magazine, and those four rounds can be combined into a single shot for massive damage. So much that you can drop an enemy with a single body shot.

On December 7, you’ll get access to a new raid – yes, Bungie has dropped the ‘raid lair’ nomenclature previously associated with this expansion and is now just calling it a raid. Whatever the scope of the content, it’ll take place in the Last City and feature plenty of vehicular action to differentiate from previous raids.

There’ll be four new exotics and one returning weapon. That’ll almost certainly be the original Destiny’s beloved hand cannon, The Last Word. An exotic quest called The Draw is set to launch on January 29, and that’s all but guaranteed to mark the comeback of Last Word.

You can see more of that content in action in the video overview below.

Future seasons will bring “Xur Bounties,” “new Gambit experiences,” a “new six-player matchmade activity,” and another “new raid.” You can see the roadmap on the official site, but you won’t get much more detail on next year’s seasonal content for a while yet.

That’s just the paid stuff, and there are plenty of free updates coming with all this, too. The most notable are a set of power increases coming with each new season, raising the cap by 50 each time.

The Black Armory release date is set for December 4, but that’s just the start of whole host of drip-fed additions to keep hardcore players coming back. The upcoming seasonal expansions represent a big shift in how Bungie’s handling new content, and the new focus is laser-targeted on keeping endgame activities fresh.