Unlocking The Dreaming City in Destiny 2: Forsaken is simpler than it first appears. For those of you yet to burn through Bungie’s major expansion, The Dreaming City is a brand new area specifically aimed at endgame players. Even after the main Forsaken campaign is dispensed with there are still plenty of stages to be completed.

Since it’s for hardened Forsaken veterans and the home of the expansion’s raid, The Last Wish, The Dreaming City is no walk in the park. Case in point: as soon as you arrive, it’s possible for enemies to one-shot you. Every enemy you come across is above 500 power and you’re going to need to be pretty tooled up before you even think about exploring this spot. But, first, how do you unlock Destiny 2: Forsaken’s The Dreaming City?

First you’re going to need to complete the main campaign of Destiny 2: Forsaken. There’ll be no story spoilers here, but we’ll be giving the full details on how to access this major endgame area from there onward. So, without further ado here’s how to unlock The Dreaming City in Destiny 2: Forsaken.

Destiny 2: Forsaken – how to unlock The Dreaming City

After the Forsaken story is over and done with, you’ll be zapped back to the Tower and prompted to visit Spider in Tangled Shore. From there you’ll receive a Broken Awoken Talisman from Petra Venj, an item that goes through various stages as you progress through this post-game quest.

In the Pursuits part of your inventory you will see the Tangled Shore Lost Sectors you’ll need to complete in the faulty talisman’s item description. There are five in this area in total, and Spider will give you a bounty with lucrative rewards for completing four. Note: the Lost Sector near Spider’s web is near a Destiny 2: Fallen nightclub featuring Paul McCartney tracks, so you shouldn’t miss it. Anyway, the necessary ones are as follows:

Thankfully the kind Redditor u/zEnkryption made the map below of the three Lost Sectors you need to complete. 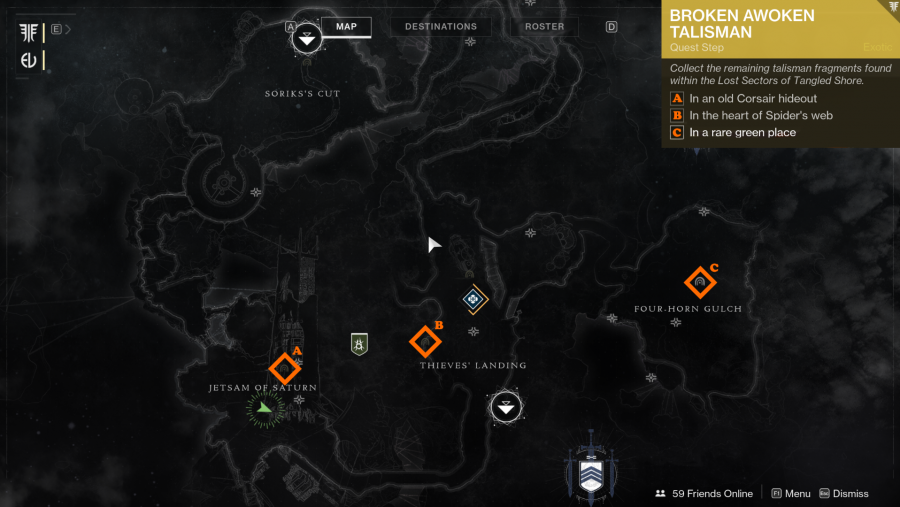 That’s only the first part of how you unlock The Dreaming City, however. Next you’ll need to absorb the darkness through the killing of 300 Taken, of which zEnkryption recommends you travel to the Lost Sector near the first spawn point on Io. Do this in solo to make sure the area resets its enemies and this should only take a few runs. After that, you need to complete the public event in Tangled Shore’s Four-Horn Gulch and stopping the ether ritual.

And there you have it, that’s how to unlock The Dreaming City. For more on the new expansion, check out our complete Destiny 2: Forsaken release date guide. For now, best of luck with this hard-as-nails endgame area.