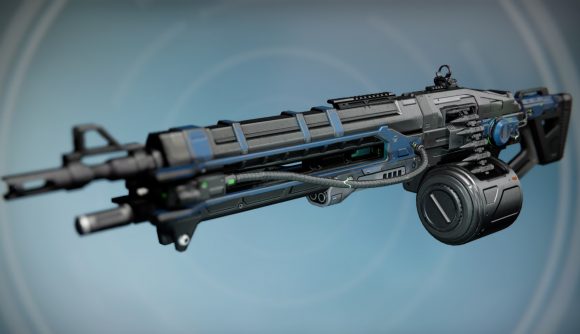 November 13, 2018 Destiny 2 now has the Thunderlord, and it’s wrecking both PvE and PvP.

Thunderlord’s return in Destiny 2 has been teased for months, and today’s update finally adds the last steps of the quest necessary to unlock it. You’ll get Thunderlord for finishing up The Lost Cryptarch, and players have already found that the light machine gun is shredding foes in both PvE and PvP. Luckily for your chances in the Crucible, the weapon’s not tough to claim.

You can undertake the quest by speaking to Holliday at the Tower to pick up Master Ives’ journal. The first part of the resulting quest requires you to collect 10 pages for the journal. Those can drop from legendary engrams, but the easiest way to claim them is from Elite Fallen enemies in the EDZ – just look for the yellow health bars.

Step two isn’t complicated, either. You’ll need to clear out three Lost Sectors – Atrium, Widow’s Walk, and Terminus East – before you’re led to the fourth location, Winding Cove. Holliday will then send you to the Cosmodrome, where you’ll find the third and final step which just unlocked today. The fight here will seem familiar if you played the first game, but you’re basically just working your way through a tough but straightforward battle against a horde of Fallen enemies.

You’ll have until November 27 to complete that quest. Once you do, you’ll get an engram that decrypts into the Thunderlord. As with the original version of the gun, this version comes complete with Lightning Rounds and the Feeding Frenzy perk, which increases reload speed as you get kills.

Anecdotally, the new Thunderlord is already wrecking PvP and PvE, as multiple players have reported. One particularly impressive Twitch clip shows the ridiculous damage it can do in Crucible.

Even if Destiny 2: Forsaken sales haven’t been up to Activision’s expectations, the results for players have been pretty good – a little extra Crucible chaos has always been appreciated.