Log into Destiny 2 right now and you’ll notice something strange is happening in the main social hub: it’s currently undergoing a little light construction. The mysterious engineering works are located in the bazaar, which you can find east of The Tower’s starting area, and features scaffolding, walkways, and other features that turn humanity’s last refuge into a building site

If the scene looks a little familiar, it’s because a lot of it resembles the construction taking place in the hanger, with welders, foremen with clipboards, and people standing in front of tool tables all concerned. Where the workers in the hanger labour away forever, though, the workers in the bazaar seem to be building towards… something. Having sprung up last night, this suggests it’s no mere cosmetic feature, but a project with a set timeframe and deadline.

Maybe the construction will result in a nice house for a new vendor? Or maybe there’ll be an NPC who lets you access a brand new gametype? Hey, it’s just as likely Zavala has ordered the instalment of this walkway so he’s got some new place to pose all dramatically.

No one knows what exactly this all means. Bungie has yet to comment on its mysterious erection, but we can certainly theorise. For starters, the location could prove important. This is going down behind where Eva Levante normally stands. She’s the Tower’s primary NPC for special events, suggesting it’s her new dedicated personal space. During The Revelry, she decorated The Tower with potted plants and coloured canvas – this time, maybe she’s been given a bit more budget. 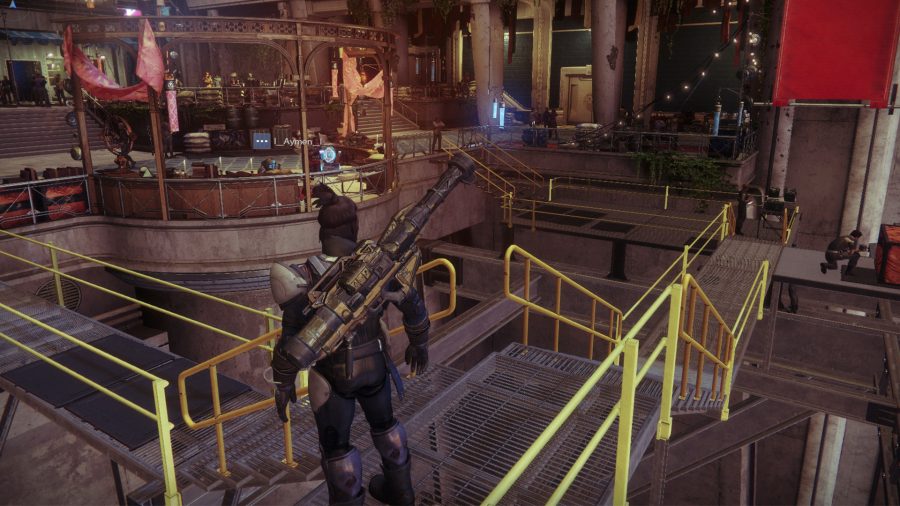 The construction is taking place next to another noteworthy NPC who could shed some light on its meaning: Ikora. She’s Destiny 2’s go-to Guardian for all things Vex Offensive, a six-person co-op mode that sees you repel waves of the moon-based ‘bots. According to Bungie’s roadmap, something called The Final Assault is coming November 11. Maybe Ikora’s getting new headquarters for prime Vex Offensive planning.

It’s not the first time Destiny 2’s Tower has changed. During The Dawning, a winter-themed festival happening from December to January, it was adorned with fairy lights, a giant holographic snowflake, and gently falling snow that, now I think about it, could just as easily have been ash from all the aliens you’ve vaporised.

Coming hot on the heels of Destiny 2’s launch on Steam last week, The Tower’s unexplained construction work shows how Bungie is already working to update its game, making it feel like you’re occupying a constantly changing world. Hey guys, can we get a rollercoaster next? That would be fun.