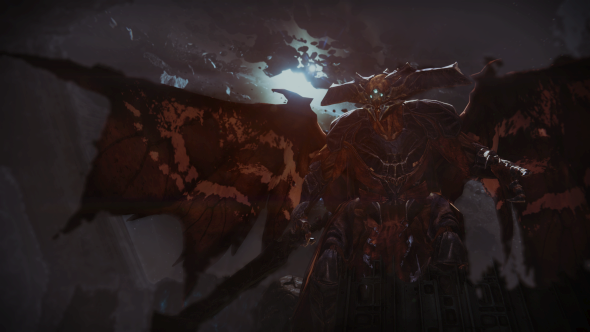 As I’ve been trying to explain to you since I started here, Destiny’s lore is actually good. Which is what makes the inconsistency of its in-game storytelling so painful. Anyway, developer Bungie has announced a lore compendium called the Destiny Grimoire Anthology – a series of physical books that will “weave tales from multiple sources together” to tell the universe’s backstory.

It looks like the cards from the original Destiny’s notorious Grimoire will be the primary sources, but the word “multiple” suggests there may be others – perhaps item flavour text or lore tabs.

The first volume is subtitled Dark Mirror. The preview images make clear that it will contain The Books of Sorrow – a series of grimoire cards about the Hive and the creation of Oryx, The Taken King. You can read them all online at DestinyDB and similar Destiny database sites, but the book does contain some lovely original art – in this case, Oryx confronting the Worm God Akka in the Deep.

Volume I is available to pre-order now on the Bungie Store, and will ship this autumn. If you pick it up, you’ll also get a code for an exclusive in-game emblem in Destiny 2. At $24.99, the price is substantial, and it’s only 128 pages, with the clear intention to ship further volumes telling different stories. The store page says:

“Each unique volume intends to illuminate a facet of the world, and the complete anthology will confirm and challenge players’ thoughts and assumptions on what it means to be a Guardian, offering new and differing perspectives on the cosmic war that rages between the Traveler and its ancient enemies.”

We are proud to announce an upcoming Destiny Grimoire Anthology.

The first volume, Dark Mirror, is available for preorder on the Bungie Store: https://t.co/bARqlEnBep pic.twitter.com/06VxFH7XKn

YouTubers like Byf and Myelin have done a lot to spread awareness of the quality of Destiny’s lore, and it’s great that Bungie is finally picking up on this. If you haven’t read any of the grimoire and you’re not put off by the price, this will be a well-presented collection of some excellent dark sci-fi short stories.

Personally though it’s stuff I’ve read before, so I’m hoping it’s only the first of many initiatives to enrich Destiny’s story, both in-game and out. I’d be down for a couple of novels, Bungie – just saying.