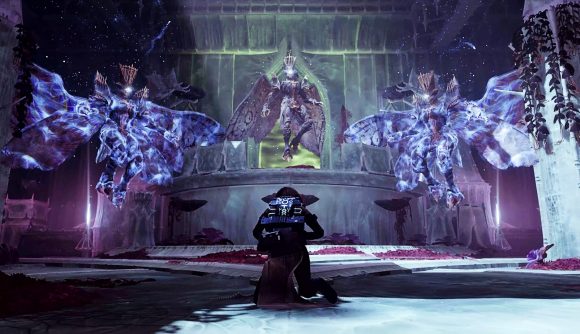 Destiny 2’s big end-of-season finale and set-up quest for the Witch Queen expansion is being met with a bevy of issues. Groups of players are reporting progression-blocking bugs while a few others who do make it towards the end can’t watch the post-mission cutscene as it’s skippable by anyone in your fireteam.

Bungie is currently investigating the bugs, though the developer does have advice to help those affected in the meantime. Players can block progression through the level by moving too quickly over the bridge encounter, so you’ll want to double back and take it slow if you’re stuck. The option to join a session in-progress has also been removed, and the power level has been lowered to 1170 from 1270.

The developer has also told players not to skip the final cutscene, though we’re not sure quite how effective that’s proving. Our head honcho, Rich, tried the mission this morning, though he was denied the chance to see his guardian in the big flashy cutscene. If the same happens to you, your best best bet might be catching it on YouTube for now.

The post-mission cutscene is supposed to tie-up the narrative of the current season and set us up for The Witch Queen. While you can watch it online, though, it isn’t quite the same without your guardian front and centre.

As we continue to investigate, please note:

❖ Progression can be blocked if moving too quickly on the Bridge encounter. Double back if blocked.
❖ Don’t skip the final cutscene
❖ We're disabling the option to join this activity in progress via Matchmaking

We got the launch trailer for Destiny 2 The Witch Queen alongside the new mission. Check it out below:

Things are looking exciting beyond that, too, as Bungie has claimed that Destiny 2’s 2022 roadmap is bigger than ever. In the new vidoc for Destiny 2’s upcoming Witch Queen expansion, assistant game director Robbie Stevens says that there’s more “Destiny coming this year than any other year before.”

The Destiny 2 Witch Queen release date is next week, so you don’t have long to wait.