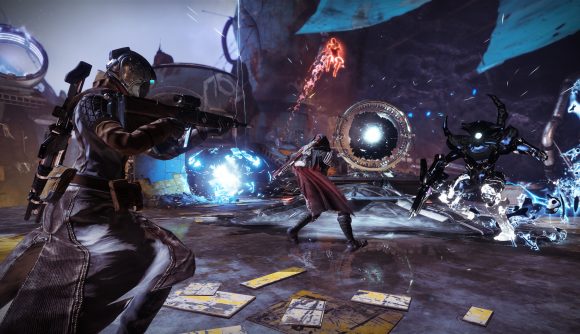 Destiny 2’s Gambit mode, a PvEvP co-op game mode that has fireteams racing to collect motes from fallen enemies to summon and defeat a massive boss, will see some significant adjustments when the Witch Queen expansion arrives next week. The latest This Week at Bungie lays out the changes in detail, and they touch every element of Gambit, from the way you queue for matches to the rewards you get for playing.

Principal designer Alan Blaine says the Witch Queen update was a chance for the team to respond to the feedback Gambit has collected over its three year stint in Destiny 2. He writes that the goal for the changes is to make Gambit “more appealing to a wider audience by addressing points of player feedback and improving upon what exists, without changing the core nature of the mode.”

To that end, Bungie is adding a Gambit Freelance node, which is a way to jump into a matchmade team without having to worry about facing off against a full stack of clanmates or friends on voice chat, who typically have an innate advantage in Destiny 2’s competitive modes. Bungie says this has helped balance matches in Iron Banner, Glory, and Trials of Osiris, and that it’s looking for another solution – but in the meantime, it’ll create Gambit games that feel more evenly matched.

Gambit also will add new respawn points to all the maps’ fronts, so you won’t always have to run all the way from the backfield to get into the fight again. It’ll also provide new points for invaders to spawn on.

Bungie is also making adjustments to blockers and the primeval boss fights. The 10-mote phalanx blocker is getting a health boost, while the 15-mote knight will have a stasis attack. During the primeval phase, teams with multiple blockers on the field will still suffer mote drain, although you’ll be able to pause this by engaging blockers in the bank area.

You’ll have more sources of ammo going forward, too. An ammo chest containing special and heavy ammo will spawn when each front becomes active, and every player can activate it once – but you’ll need to get there quick, because it’ll time out after 20 seconds.

This week at Bungie, we are but days away from the launch of The Witch Queen.https://t.co/8jyTfG25vj pic.twitter.com/6ZGyYfd4Ti

Primeval fights are going to take longer, while the mote-gathering phase should be shorter after the update. The envoys that shield the primeval will spawn with friends out in the fronts rather than near the bank, and so you’ll have to move around to hunt them down rather than pivoting in place to switch from damaging envoys to shooting the boss.

There’s one less invasion phase in the reworked Gambit mode – once the patch arrives, invasions will open at 40 and 80 mote thresholds, and during the primeval fight. Invader kills during this phase will heal the primeval for exactly 27% of its health, rather than some value between 5 and 35% – Bungie says that range had been caused by a bug, which it has now addressed.

There aren’t any changes that are earth-shattering on their own in this list. But their cumulative effect – at least, Bungie hopes – will be to “realign the mode with many of its original goals.”

The Witch Queen release date is set for February 22.