When a community builds itself on a widely perceived design flaw in a videogame, issues are bound to arise when that game’s creator comes back to tinker with those foundations. Fans of Destiny’s lore know this well, as the community they built came close to toppling after Bungie chopped the sci-fi shooter’s Grimoire cards down in size, and shifted them from online to in-game for Destiny 2.

Many other fans saw the lore cards as representative of Destiny’s narrative shortcomings upon release – they held the hint of a greater story than the one on offer in-game, but were only accessible online in writing. For many, the game’s main story echoed a game’s development gone awry, with Kotaku revealing that Destiny’s original story was rebooted late into development, but was barely strung together thereafter as slick gameplay increasingly became the focus.

For Destiny’s lore fans, however, the mystery held by the game’s absent story proved to be a more alluring prospect than going gun-to-gun in the game’s crucible or exploring the Vault of Glass raid. “At that time there was a huge gap,” Matt, the creator of Destiny lore-focused YouTube channel Myelin Games who choses to stick with just his first name, recalls. “There were a lot of people who enjoyed playing Destiny, and everyone knew that the story had been scrapped, but no one was piecing it together yet. But there was a group of people who wanted to be more involved in the universe of Destiny.”

Destiny’s lore community brought the game’s player environment into a subtle rhythm. Anyone drawn to the mysteries of a good story could piece together a swathe of Grimoire cards on Reddit like a narrative puzzle. For content creators like Matt, it also provided the chance to combine theorycrafting with a pinch of showmanship. Others who enjoyed Destiny, but found the Grimoire cards inaccessible, gained access to oodles of community created content – giving them the chance to connect with the stories behind the alien worlds they were busy inhabiting and pillaging for loot.

One user of Destiny’s lore-focused subreddit tells me that the game’s lore has “always filled the void” of their mind as it “wanders aimlessly in times of boredom, wanting to be occupied by some extraneous thoughts or analyses.” Another tells me that the old Grimoire system got them into the lore itself, as “most of it was very well written, tied together really well, built a compelling atmosphere for the game, and left tantalising threads hanging just begging for speculation and theorycrafting.” 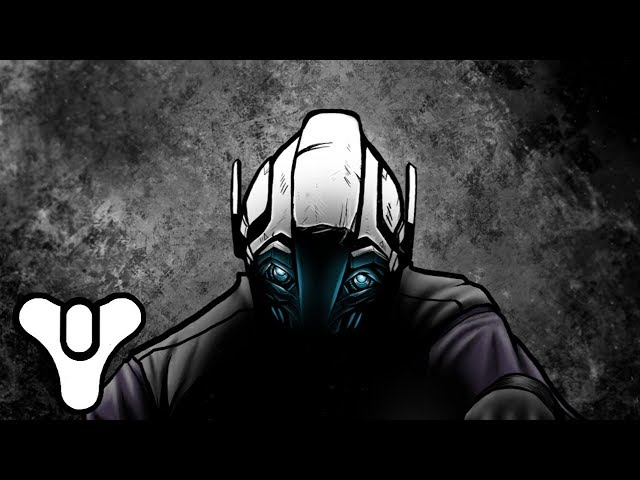 The sense of enjoyment and calmness some found in the videos also provided Matt with one of his proudest moments as a content creator. Once an occupational therapist, he reveals that he left after a disagreement with his employer and decided to take to YouTube to create videos that merged therapy and gaming – Destiny became his focus as it had the most buzz at the time. It wouldn’t be until Matt ditched the idea and pursued something he enjoyed in the game’s lore, however, that he would craft something that others found therapeutic.

“One of my greatest YouTube moments was when I started talking about mental health in games and got people to email me their stories,” Matt explains. “A lot of people said the lore videos helped with their anxiety and depression – helped them feel good for that moment and relaxed. I never really knew that the videos could be therapeutic in that way, which is cool, because it came back to the original goal.”

Loaded: all the Destiny 2 exotic weapons

That sense of harmony was disrupted with the arrival of the game’s sequel. The Grimoire cards were chopped down in size and scattered throughout the game, from lore tabs on guns to scannable objects on various planets that would part with a few lines of dialogue. “Most people’s concern was that the lore would lose its complexity, and I think that was true,” Matt says while reflecting on the game’s launch. “With Grimoire cards you had entire paragraphs, and in the case of the Books of Sorrow you got complete collections of stories, from short stories to entire pages about certain characters.”

Alongside a loss of detail, players also had no way to organise or access all the lore they obtained – whereas the Grimoire cards were already archived and available online in Destiny. The lack of an accessible organisation system made it harder to piece different bits of lore together. Worse still, it isolated some of the casual players that Bungie hoped to include in Destiny 2. 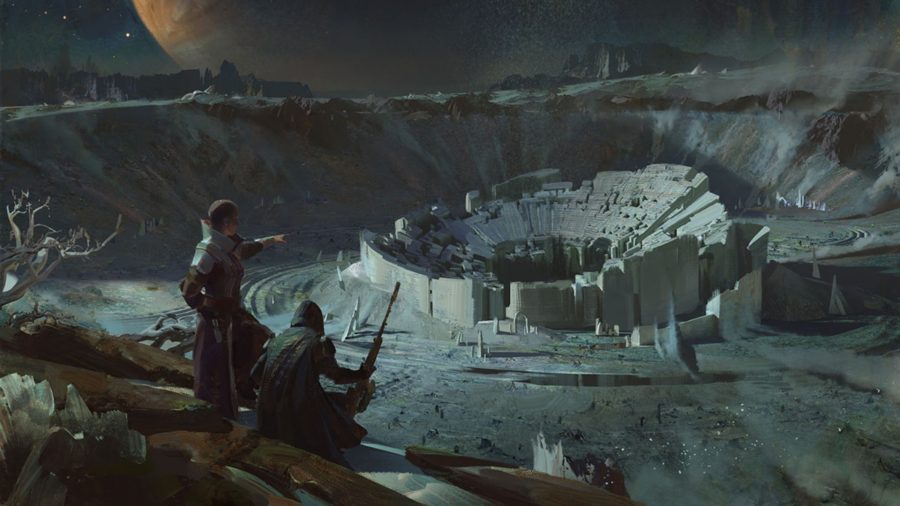 “Even if they intended to make it more accessible, by putting the lore tab in they created an inaccessible area,” Matt reasons. “A lot of people complained, as they used to read Grimoire cards on their lunch break or before they went to bed. The lore community started doing those things outside of the game. Everyone initially hated the Grimoire cards being outside of the game, but it ended up being a hidden gem. If you didn’t have time to get back into the game and play Destiny, you could go to the website and read Grimoire cards. The gut reaction was that it sucked, but it ended up being a cool feature.”

Everyone initially hated the Grimoire cards being outside of the game, but it ended up being a hidden gem

For a spell, the game’s lore community were left to their own devices, with word yet to come from Bungie on what it had planned in terms of updates and fixes, or if there would be any at all. Luckily, the members of the community had already been organising the game’s lore into neat and accessible collections on a website called Ishtar Collective since Destiny’s early days. While it proved helpful, the website’s creator, Baxter (who also prefers to stay on first-name terms only) , maintains Ishtar Collective’s importance was more of a happy accident.

“I loved the writing, world-building, and the game itself. But it frustrated me that I had to unlock all of these things, and then when I unlocked them I couldn’t read them in the game,” Baxter tells me. “I was interested in the lore, and I wanted a way to collect all of the Grimoire cards together. So I built the website and then it became a resource for a lot of people in the lore community. The lore community already existed, but I built something they found useful.” 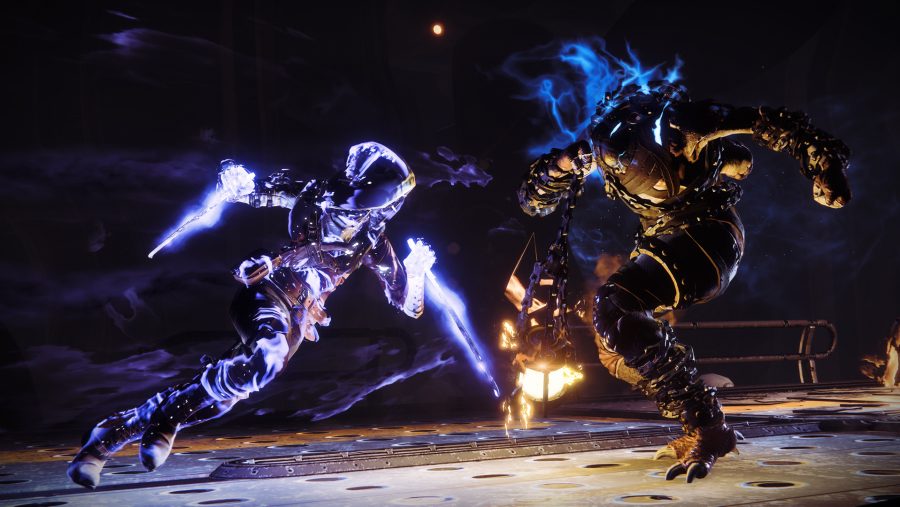 While Ishtar Collective had to adapt to Destiny 2’s lore being located inside the game, Baxter explains that his team had been somewhat prepared since The Taken King expansion, as they had to transcribe audio clips whereas everything text-based could be pulled from the API prior. “Destiny content has changed, and we’ve had to change with it,” Baxter says. “Especially with having to introduce transcripts and things like that.”

Destiny content has changed, and we've had to change with it

While the remaining community managed to pull together to keep their hobby inclusive, Matt admits that the dwindling interest in Destiny 2 and its lore led to some hardships in content creation. “I think 2018 was probably my worst year on YouTube up until Forsaken,” he remembers. “The first three quarters were pretty awful, I think for the very first time on YouTube I saw negative subscribers in a month, and it wasn’t necessarily to do with what I was uploading – people were just leaving the franchise altogether.”

His luck would eventually turn when Bungie came back to the game’s players with a roadmap of fixes and a promise to be more transparent. As part of that pledge, Matt got the opportunity to join an envoy of prominent players in visiting Bungie’s studio to preview Forsaken and give feedback on Destiny 2. While in Seattle, an impromptu meeting with game director Christopher Barrett led to a chance to shape the way players consume lore by helping to create a book. “I ran a survey with the lore community and had about 5,000 responses,” Matt says. “So I presented a bit of a report on what people wanted to see change in the lore, and they were receptive towards that. That’s how I got the Grimoire Anthology job, as they were impressed with the report and how I looked at getting feedback.”

Alongside highlighting cool opportunities for additional artwork, Matt tells me that Bungie tasked him with organising the lore into an easy-to-follow anthology. “Part of my role was to decide what things should go in and in what order as a collection, and how a reader might be able to get through that without being confused because there are a lot of puzzle pieces in the original Destiny.”

Since the release of Forsaken and the first Grimoire Anthology, Matt feels that things have got considerably better for the lore community, as things have become more accessible. “People are either reading the lore in-game now or using their phones to read it on Ishtar Collective or another website,” he says. “The order is there, so it’s almost like an anthology in itself, and there’s a clear start point and finish point.”

Notified: all the Destiny 2 updates Bungie has planned

It’s a sentiment that Baxter seems to agree with, while also highlighting the improvement of the game’s written content since the release of Forsaken after months of feedback. “There have been different messages that we’ve gotten from Bungie over the years, where we’ve had different impressions of how invested they are in the lore,” he says. “But, I do think over the past year we’ve had so much amazing content. Even outside of the game completely with the narrative previews that Bungie has put on the website.”

This confidence in the game extends beyond its distribution of lore, too, as even from a gameplay point of view Matt believes that Destiny is in a good position considering the slew of games that have attempted to knock it off its perch. “With Anthem, people see the difference in the amount of polish between the two.” he continues. “When you look at the complaints of the Destiny community, it looks like nothing in comparison to the other games coming out. That being said, I think The Division 2 has found a niche, a market, and it’s very polished now. But regarding sci-fi shooters, Destiny is still there, and no one has been able to replace it.”