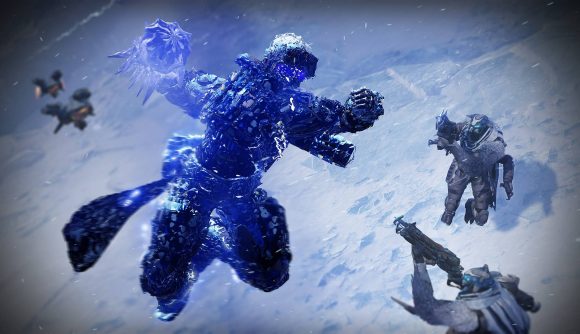 Destiny 2‘s new Stasis subclass is proving to be quite the headache. Since Bungie introduced it in Beyond Light, the developer has had to push the game’s competitive mode, Trials of Osiris, back two weeks after players found a way to loop the Warlock’s Shadebinder super infinitely.

Players then discovered that they could use the Warlock’s super to defeat any of the space game’s raid bosses in no time at all. All you need is five of them and a Hunter. It wasn’t clear initially if the tactic was just powerful, or if a bug was at play. But, with Destiny 2’s Deep Stone Crypt raid happening in a few days, plenty pointed out that whatever was going on could undermine the race for raid’s World First. Bungie has since confirmed that Stasis is bugged and that the team is working on a fix. As such, a delay to the raid shouldn’t be required.

“At this time, there are no plans to delay the Raid,” Bungie’s senior community manager writes on Twitter. “Team is investigating alternate fixes to that pesky Stasis bug which will prevent harm to the World First race. We’ll have updates later in the week on what to expect.”

Bungie’s update comes after clips highlighting the strategy began to circulate online from popular Destiny 2 streamer Gladd and his clan Redeem. The way it works involves using one Stasis hunter to prime a boss, and then five Shadebinders to muller the thing into oblivion. It looks like there were other elements in play, too, such as the new Stasis Exotic grenade launcher Salvation’s Grip, which can also be used to freeze enemies.

At this time, there are no plans to delay the Raid.

Team is investigating alternate fixes to that pesky Stasis bug which will prevent harm to the World First race.

We'll have updates later in the week on what to expect.

As for what Bungie will do to fix it, we’ll need to wait and see. Since Beyond Light has launched, the developer has temporarily disabled the Witherhoard due to a bug and fixed a Lost Sector’s generous drop rate as it was allowing players to hit Destiny 2 Beyond Light’s soft cap within an hour. So the studio has certainly been busy.

What the fuck is this shit??????? pic.twitter.com/rIPEr6faki

In the meantime, though, if you can check out our Destiny 2 Beyond Lights Exotics or Destiny 2 Entropic Shards guides if you need help making the most of your time on Europa.