Bungie recently released the Season of the Splicer roadmap for Destiny 2, covering everything we can expect from the next season, including the Vault of Glass release date, and more about the new Destiny 2 Armor Synthesis system, including how to use it to transmog your gear as soon as the season releases.

This looks like an explosive season for Destiny players, as Mithrax returns as an allied NPC that you’ll have to work with to counteract a threat to the city. The trailer channels an 80’s Tron aesthetic, as the Last City plunges into an endless night and you combat the Vex simulation together with Mithrax, participating in various quests and activities. 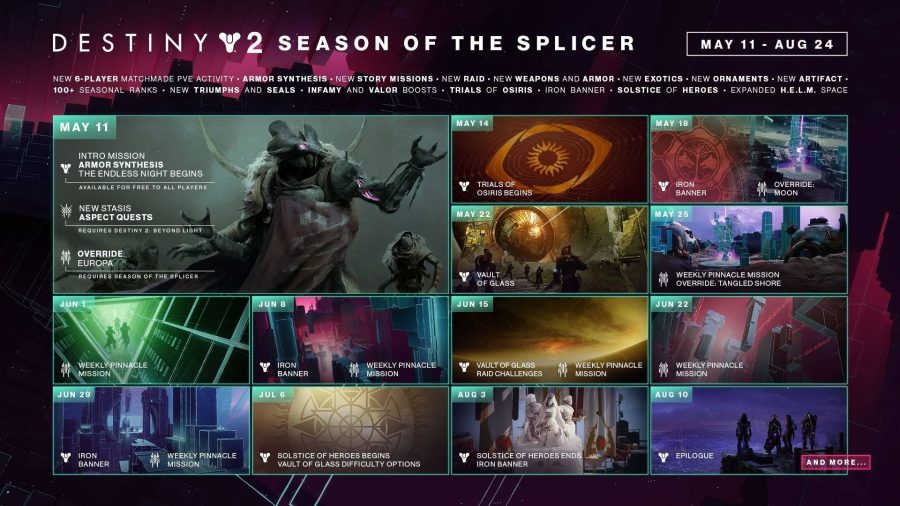 Season of the Splicer roadmap

Alongside the new raid, there’s also weekly pinnacle missions where players are required to uncover vulnerabilities within the Vex and use Splicer Keys to infiltrate and collapse it, all part of this season’s story. There’s also a six-player matchmade activity called Override, where teams can hack into the Vex to uncover secrets, steal code, and turn their power against them.

The new Exotic Statis sidearm, Cryosthesia 77k, unlocks with the battle pass – but expect plenty of new and reprised legendary weapons too, as over 30 land with the new season.