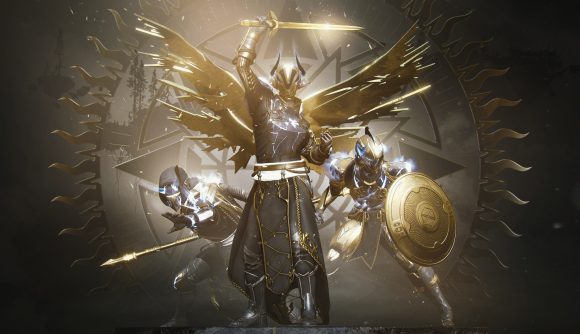 Destiny 2‘s yearly Solstice of Heroes event is nearly upon us. As is tradition, you’ll get a set of tatty armor that you can upgrade to the legendary tier if you complete the given objectives. As is also tradition, those quest steps have been data-mined.

If you hop on over to Light.gg and search for ‘solstice‘, you’ll see this year’s armor set alongside the quest steps you need to upgrade them. All the quest steps seem pretty similar to last year up to a point. You’re tasked with playing gambit, doing public events, and playing the event exclusive EAZ mode.

Of course, what we’re interested in are the objectives we have to complete to get the gear to the ‘magnificent’ tier, which is the best one. These are the same across different Destiny 2 classes and involve completing one nightfall on master difficulty, doing a nightmare hunt and a pit of heresy on the moon, winning seven Trials of Osiris matches, and defeating the final boss in Altars of Sorrow. Our dep ed’ Rich is not keen on doing Trials, but me – a renowned champion of the Crucible – i’m not fazed. It’s worth noting, however, that those seven wins don’t have to come from one card, and be racked up bit by bit.

Destiny 2 data-miner Ginsor put together a nifty image showing off the final quest steps that you can see below.

It’s also worth noting that, as these are quest steps, they could change when Destiny 2’s Solstice of Heroes goes live August 11 at 19:00 CEST / 18:00 BST / 13:00 ET / 10:00 PT. Light.gg has proven reasonably accurate before, though, especially with the roll for the Felwinter’s Lie shotgun.

Who wants to carry me in Trials? 🥺 pic.twitter.com/eIsNYqEJ9k

Thankfully, you’ll have plenty of time to complete these quest steps, as the event runs until September 8 – that’s four weeks. If you’re looking for some Destiny 2 builds to put some muscle behind your majestic appearance, we have that covered. You also might want to check out our best Destiny 2 best class guide if you only have time for one character.