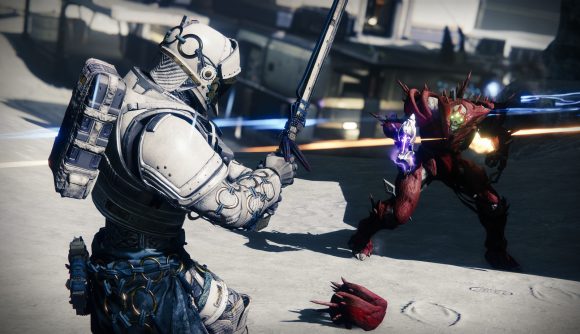 Destiny’s swords have always been a neat gimmick, but they’ve struggled to find a role as much more than that. As we look forward to the Destiny 2 Season of the Worthy start date – as dataminers have suggested the name will be – Bungie has provided a taste of what to expect from season 10. And that taste includes details on a massive sword rework.

Swords will now have an energy bar in addition to ammo, as Bungie explains in the latest dev blog. The energy meter will appear instead of your melee when you’ve got a sword equipped, and the energy refills automatically over time. The energy meter governs things like guarding – which now doesn’t consume ammo at all. Each sword will have its own energy consumption rate and damage resistance, and Bungie hopes this all means blocking is actually useful.

Your light attacks now loop for an infinite combo, as Bungie’s found that the traditional three-hit combo doesn’t really work for FPS games. Heavy attacks will now consume sword energy, too – your attacks will do less damage if you’re out, to help keep players from “endlessly mashing the heavy attack button.”

Swords also now partially bypass elemental shields, in an effort to differentiate the two weapons as close-quarters tools. Across the board, each individual sword will get rebalanced and have its perks adjusted, so there’ll be plenty to experiment with in season 10.

In reference to recent in-game events, Bungie also says in the update that “this isn’t the last trial you’ll face – not by a longshot.” Trials confirmed, et cetera.