How do you complete the Destiny 2 The Invitation quest? There’s plenty of steps to the Season of Opulence’s opening bounty, and each of them presents their own challenges. You’re tasked with completing the Glorious Harvest bounty and then solving the Imperial Treasure Map. All of this is worth doing, however, as it’ll drop 690 Light Level loot, which is perfect if you’re catching up on levelling up for the Destiny 2 Crown of Sorrow raid.

We would recommend that if you’re booting up Destiny 2 for the first time in a few months, that this quest be the very first thing you do. That way, you’ll stand to gain more Light Levels from doing your dailies, weeklies, and unique activities, as you’ll be 690 Light. The Invitation quest is also mandatory, as you need to do it to gain access to the new Menagerie game mode, and in-turn the new Raid.

Now that’s out of the way, fly to the Tower, and you’ll notice that Benedict 99-40 is now in the Annex. Go and chat to him, and he’ll give you The Invitation quest.

How to complete The Invitation quest

The first step of this quest is simple enough, go and talk to Ikora and you’ll get a Power Surge Package for your troubles, which amounts to a 690 level class item and energy weapon.

After that, you’ll need to fly to Nessus to find the barge, which is to the north of the Watcher’s Grave. It’s quite noticeable so you won’t miss it – climb in and talk to Werner 99-40 for another Power Surge package. This one contains a 690 power Kinetic weapon and arm and leg armour. You’ll also get the Cracked Chalice item and the Glorious Harvest quest, so let us focus on the former for now.

How to complete the cracked and mended Chalice quest steps

To complete the Cracked Chalice part of this quest, all you need to do is defeat Cabal on Nessus. The best way to do this is through a Public Event that features Cabal – so keep an eye out for the Cabal Excavation Public Event in Artifact’s Edge.

Once you’ve done this, you’ll be onto the Mended Chalice step, where you need to defeat 25 Vex on Nessus with melee attacks. If you’re still in Artifact’s Edge, there’s no need to leave as a group of them spawn to the right of Artifact’s Edge quick travel destination. If you want to speed things up, go to the nearby Lost Sector, called The Orrey, and you’ll be spoiled with Vex to batter.

Once you complete that step, you’re tasked with recovering Cabal currency, called Imperials, from within The Conflux Lost Sector on Nessus. This step is a breeze, just fast travel to The Cistern and travel to the Lost Sector. If you look at your map, it’ll be the only Lost Sector in the area, and two arches signify it with a dot underneath.

Once you have it, you’ll be talked through how to use the currency to unlock a Rune slot on the Chalice.

How to complete the Glorious Harvest bounty

Now you’ll want to complete the Glorious Harvest bounty, which you would have gotten from Werner 99-40 earlier. You’ll get this quest from our robot friend every week, and it’ll reward high tier loot. The quest steps are as follows:

The first two steps take care of themselves, and we would recommend doing the daily challenge to complete the third part of the quest swiftly. If you’ve already done the daily, then fret not as you can also do any weekly challenge, Heroic Story Mission, or an Ascendant Challenge. 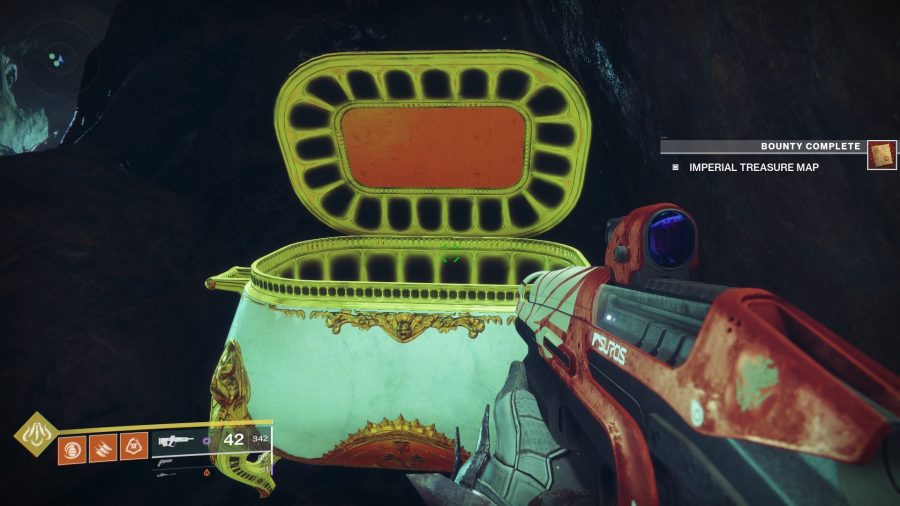 Where to find the Imperial Treasure Map location

To finish up this part of the quest, you’ll need to find the treasure chest marked on your map. If you open up your directory and look over Nessus, you’ll see an X over the Well of Flames in the bottom left corner.

Fast travel to The Cistern, and head to the far south-west until you see a large cylindrical structure with a triangular entrance to the side. Once inside, you’ll see a massive drop, so hop down and look behind you. To your right, you should see a glowing square on the ground, and to your left, you should see a big rock. Head to the rock, and the chest should be hiding behind it.

Once you open the chest, you’ll get the Rune of Jubilation, which goes in your Chalice of Opulence. Once you’ve slotted it in, speak to Werner 99-40, and you’ll get another Power Surge package that should take your overall light to 690.

Now that’s done, you’ll be 690 light level overall. All that’s left to do is complete a match of the new Menagerie mode, which you’ll feel familiar with if you’ve ever played Halo or Gears of War’s horde modes.

And there you have it, how to complete the Destiny 2 The Invitation quest line. If you’re loading up the Season of Opulence for the first time, this is the best place to start as it’ll round your Light Level up to 690 up nicely, while also giving you an introduction to the new Menagerie mode. Apart from that, all that’s left is to jump in yourself and get to the grind.