I once believed Destiny was incapable of having a campaign that could compare with those of Titanfall 2 or Doom Eternal. It’s a service game,  an always-online multiplayer game, and a looter shooter – its activities need to be replayable, it needs to scale for cooperative play, and its loop is loot based, not story based.

This explained the mediocrity of Destiny’s previous campaigns, I reasoned, and why no future ones could ever match those of purebred single-player shooters. The Witch Queen (you can buy the DLC here, coincidentally) doesn’t disprove that – Titanfall 2 and Doom Eternal remain unsurpassed – but Bungie has closed the gap more than I believed possible.

It’s hard to pinpoint the cause because so much is similar on the surface, but in certain moments I can feel it. Halfway through the campaign, I find myself in a luscious valley. A mossy cliff unfurls around the shoulder of a mountain to my right, a craggy black temple looming in the distance. Clouds of dark ether condense into hordes of censer-swinging Ravagers, who charge me as Raiders snipe from distant bridges.

On the campaign’s new Legendary difficulty, a single bolt from the Raiders is almost enough to kill me. I make a tactical retreat – rarely necessary in a Destiny campaign before – to jump on a bridge I just passed, getting me off the ground and clear of the Ravagers. Dodging arcing bolts of purple fire, I pull out a sniper rifle and burst the Raiders’ heads in a series of satisfying pops.

I creep further around the cliff, and the next few waves include lightning-spitting walking tanks named Abominations. I jump and slide between rocks, popping up from cover just long enough to fire a Gjallarhorn rocket or slow another Ravager charge with a Vortex grenade, which has acquired gravitational powers in the Void 3.0 abilities update.

Apart from Void 3.0, few of these ingredients are new, but it’s easier to savour them when they’re served in this thoughtful way rather than mixed together like a student’s stir fry. Previous Destiny campaigns have sent players into admittedly beautiful open worlds to hunt packs of simple-minded aliens and called it a mission. The Witch Queen, on the other hand, branches away from its open world more often than ever, sending you into tighter spaces where the experience can be more closely crafted.

This forces an equally deliberate response from the player, especially on Legendary difficulty, and I find myself actually thinking about some fights in a Destiny campaign for what may be the first time. It’s almost disorienting when the building blocks are so familiar, like an illusion sculpture whose components only click into place when viewed from the correct perspective.

There are moments when Legendary difficulty oversteps into frustration, such as Brutiks, Lightbane, and a final boss that could’ve been one phase shorter while still hitting the ‘epic’ sweet spot Bungie was clearly aiming for, and I relied on tools that new players won’t have – mainly Gjallarhorn and rocket ammo finder mods – to complete it solo. Classic difficulty is still around to offer the less challenging experience of past expansions, however. 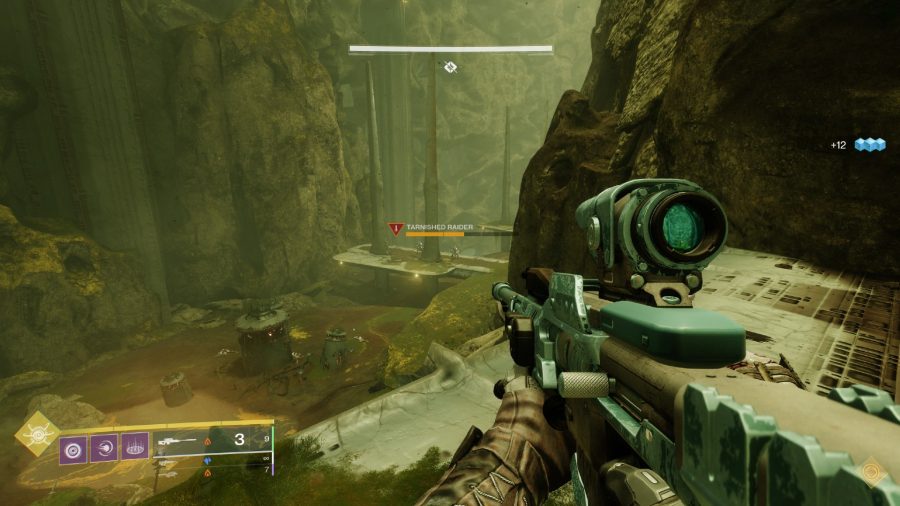 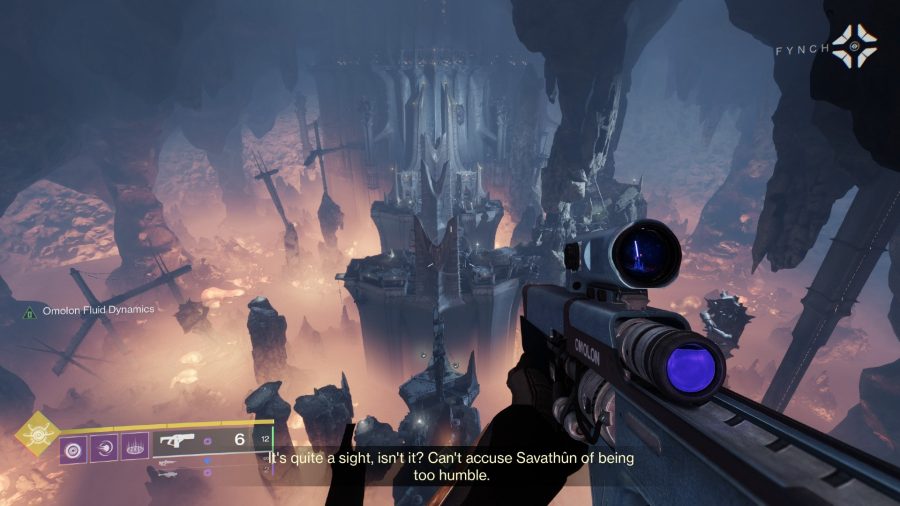 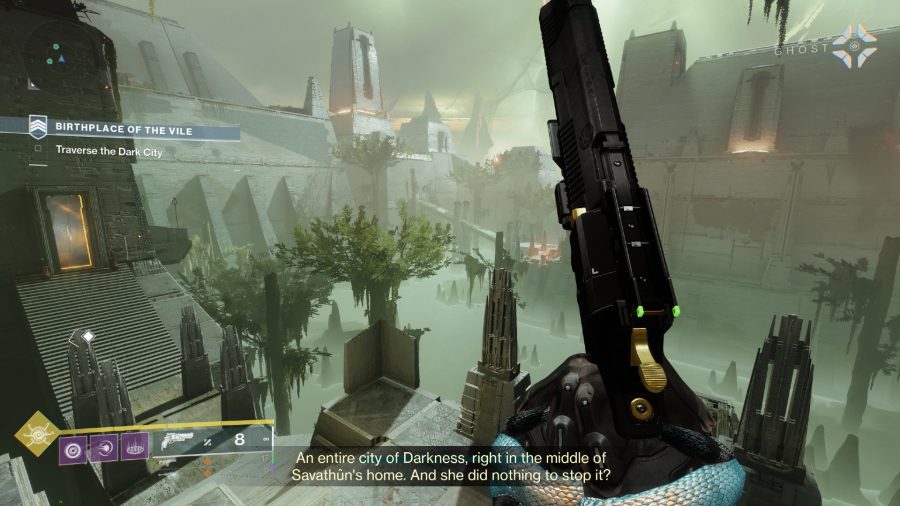 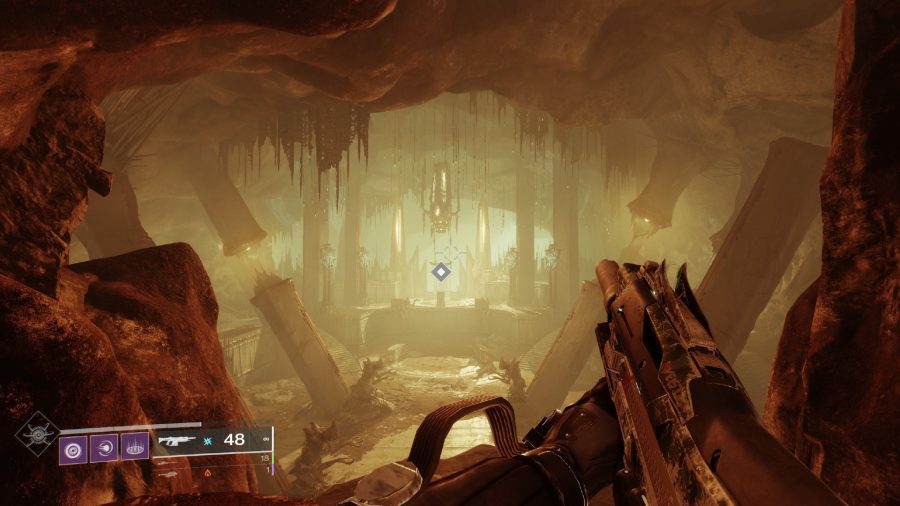 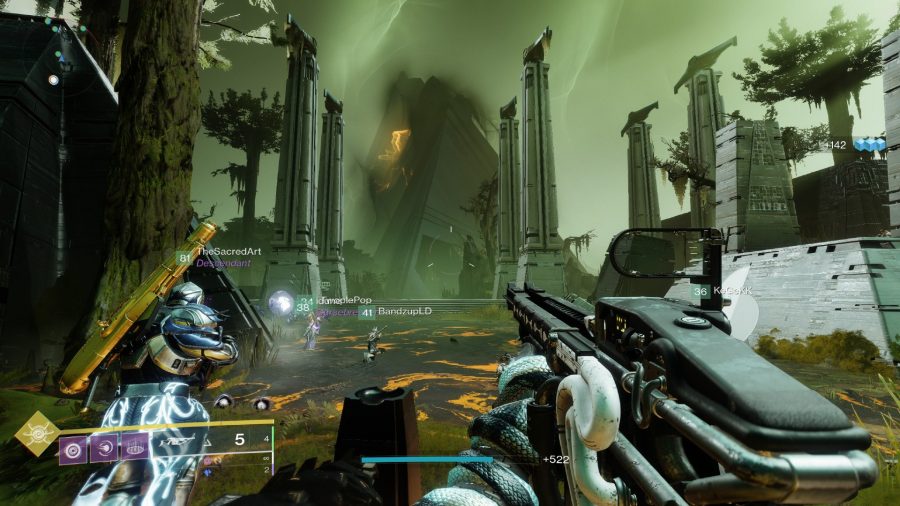 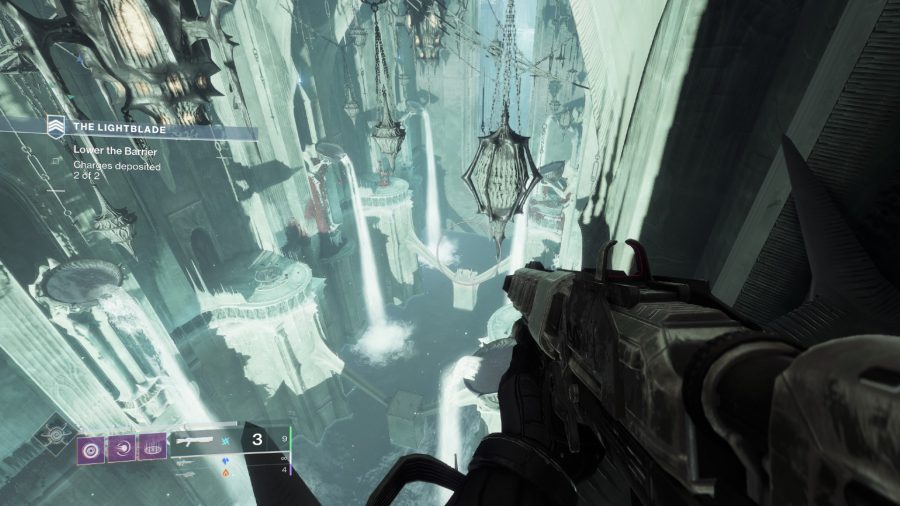 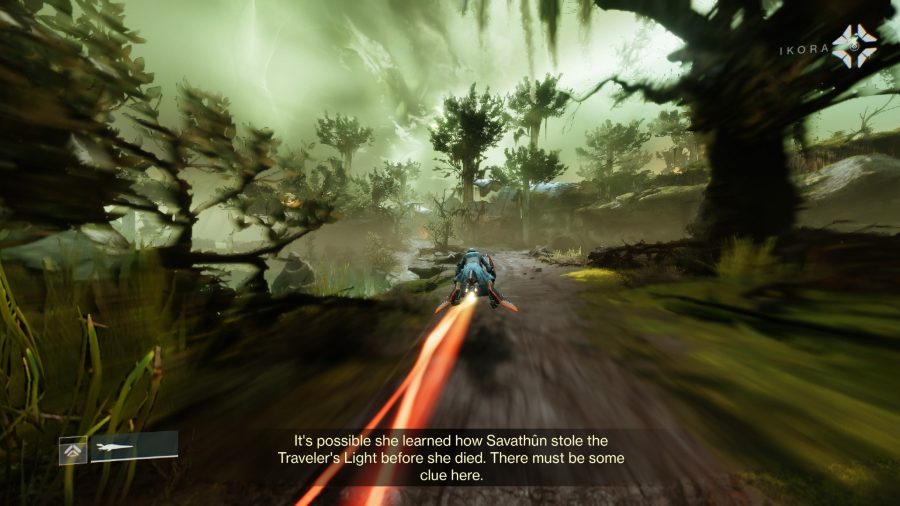 My only other criticism is that the campaign structure can feel a bit repetitive. You’ve been blessed with a new ‘deepsight’ power that’s mysteriously linked to The Darkness – not the British glam rock band, but supposedly the enemy of The Light from which you derive your space magic – and in order to defeat the cunning arch-villain Savathûn, you’re sent to find a number of artefacts associated with her. From these you will use your deepsight to extract her memories and discover what she’s up to.

Imagine admiring Michelangelo's David only to notice he's got claws

So far as I can make them out among Destiny’s infamous space-babble, there are inconsistencies in the rules invented for this process, and I was hoping for more of a plot than just ‘hunt a bunch of maguffins’. It’s reminiscent of Forsaken, Shadowkeep, and Beyond Light, which all padded out their middle halves with repeatable missions that had you hunting bosses – good for reusable content, bad for plot development and mission variety. Fortunately, the artefact hunts aren’t used this way, and while the objectives feel repetitive the missions themselves are excellent and varied.

And in fairness, the maguffins serve the campaign’s wider goals. Each set of memories unveils new truths – or perhaps lies – that shake the foundations of Destiny’s grandiose sci-fi universe. Prior experience will undoubtedly help veterans grasp the significance of all this – and breathe a sigh of relief that Destiny’s story is moving forward at last – but there’s enough here to intrigue newcomers, too. There’s a lot of philosophical wrangling about the nature of The Light and The Darkness, and whether tools can corrupt their wielders. Your boss, Commander Zavala, makes the point that, even if Darkness can be used with discipline, those who can’t do so aren’t the only ones who pay the price. 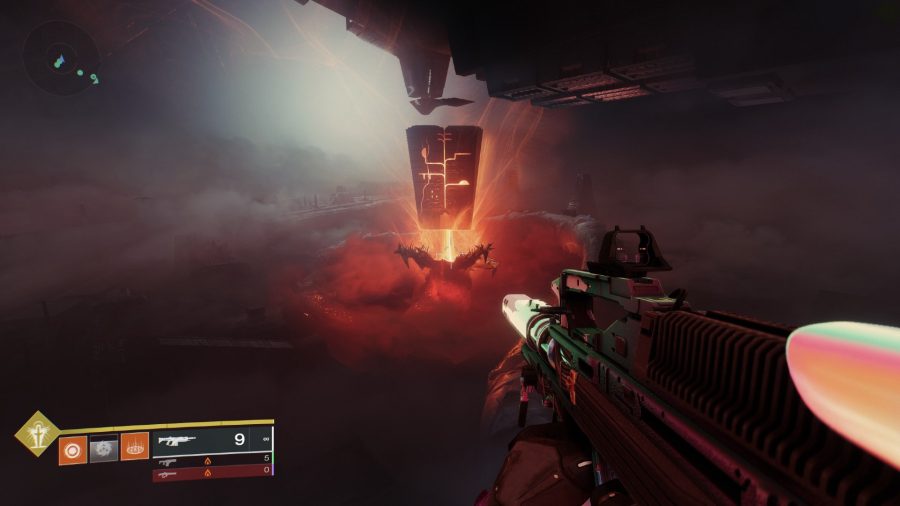 So while it’s not immune from criticism, Witch Queen is unquestionably head and shoulders above any other campaign in Destiny history. After you’re done, you’ll return to the Throne World to complete quests, try the new strikes, and eventually tackle the Vow of the Disciple raid.

I’ve not felt as much compulsion to explore its secrets as I did the Dreadnaught’s, but the Throne World may be Destiny’s most artistically impressive destination yet. Its tumbling, foetid swamp contrasts with the disturbing luminescent beauty of Savathûn’s fortress, which, tragically, arrives too soon for visitors to explore in the virtual reality art galleries of the 2040s. Fountains and rose gardens decorate its courtyards, evoking childhood trips to Tudor castles, but look a little closer and everything is just… wrong. Imagine admiring the beauty of Michelangelo’s David, only to notice he’s got claws. The statues are of Hive, not humans, and the roses are wilted, too violently bloody in hue, with too many thorns. The white stone of the battlements is too white, and unnaturally glossy – it looks like snot would slide off it.

Vow of the Disciple went live over the weekend, and it’s among Destiny’s best raids ever. There are important roles for every player in each encounter, a good mix of different forms of challenge, and two excellent bosses which demand more from players than simply sitting in a Well of Radiance every damage phase. The final boss does this especially elegantly, and gets bonus style points for his hilarious insta-kill karate kicks. It’s also dripping with atmosphere and perfectly paced – Last Wish may be brilliant, but it’s too long. 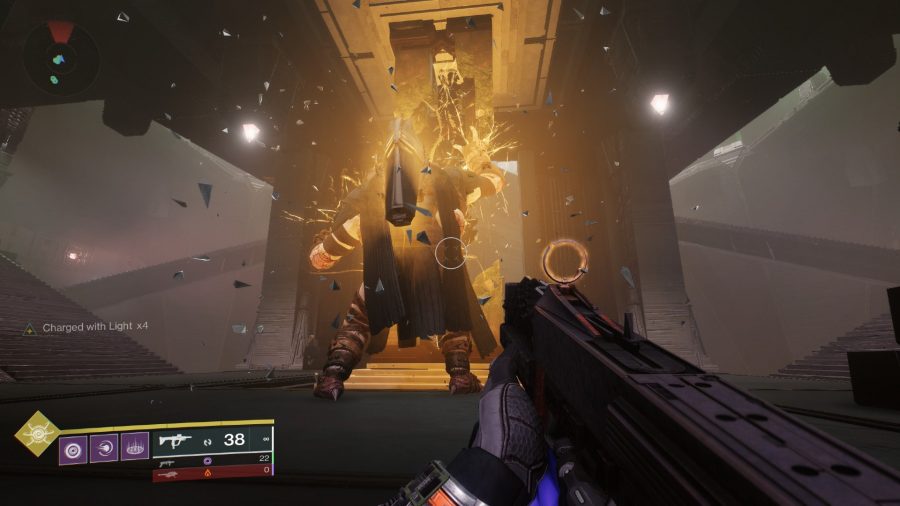 A Destiny expansion is about systems overhauls as well as new content, and the two headline features of Witch Queen are Void 3.0 and weapon crafting. Void 3.0 updates the game’s original Void subclasses with the new format of Beyond Light’s Stasis subclasses, which were roundly praised for their flexibility, and the result is as successful as everyone hoped. All previous abilities remain, new ones are added, and it’s possible to mix them all across individually selectable nodes rather than three fixed configurations. Getting into the implications for buildcrafting is beyond the scope of this already lengthy review, but it’s another win for player freedom in a game that’s been making huge strides in this department since Shadowkeep gave us armour 2.0.

To craft a gun, you first need to unlock its 'pattern', then forge it with weaponsmithing resources. Patterns and resources are both extracted from guns marked by a new red box after a light grind. Any red gun can yield resources, but patterns need specific weapon drops, which adds a lot of RNG to the process. But the real work starts after you've forged a gun.

Crafted guns have XP levels, and the best perks are locked to higher ones - generally, levels 12 to 16. It's a massive grind to get just one gun that high. Once you've unlocked the perks you want, you have to spend more resources to 'reshape' the gun and apply them. This can be very expensive and some of the necessary resources have frustratingly low caps.

But two steps forward, one step back. Weapon crafting is a much more mixed success: as with too much else in Destiny, it feels unnecessarily convoluted, with multiple stages in the crafting process that inject it with RNG, two grinds, and at least two payments that players must make in new resources with frustratingly low caps. I suspect the intention is what it appears to be: to put many obstacles in front of players before they can finally achieve the dream of curating their own roll from every weapon perk in the game.

I get it, to a degree. Replaying dungeons, raids, GM Nightfalls and other high-end content to get a good roll on Destiny’s best weapons is fundamental to player investment, which means the ability to choose your own roll may be the biggest change Bungie has ever made to Destiny’s loot economy. I didn’t expect it to come easily, but like the introduction of transmog, this feels a bit miserly. It also means that if I’m not leveling a crafted weapon, I feel like I’m missing progress.

That sucks, because giving us an amazing toybox of great-feeling guns to play with is one of the precious few things at which Destiny has excelled from the very beginning. Witch Queen is no exception to this, and yet weapon crafting in its current form gives me a really good reason not to experiment with the full breadth of its arsenal.

So there’s a little frustration among the brilliance, but that’s nothing new to Destiny players. What’s striking about The Witch Queen is how decisively the mix has shifted towards the latter. In January, having thoroughly enjoyed a year of much richer seasonal stories and the 30th Anniversary Pack, I wrote that Destiny was “officially really good now“. I got some blowback on our Facebook page that you can always find someone saying the same thing after every update, which is true – it’s a meme, like forever saying the next expansion is “make or break” – but I’ve never said it before. The Witch Queen has brought Destiny 2 to higher heights still.

It’s not flawless, but it’s clearly a top-tier expansion for this series, on par with Forsaken and ahead of The Taken King, in my view. And unlike them, it comes when the game is already in a good state, rather than a crisis. Times are good in The Tower.

Challenges Forsaken for the title of best-ever Destiny expansion, and has much stronger foundations to build upon. Destiny 2 was already in a good spot, but Witch Queen represents a new peak for Bungie's oft-imitated, never-dethroned looter shooter.