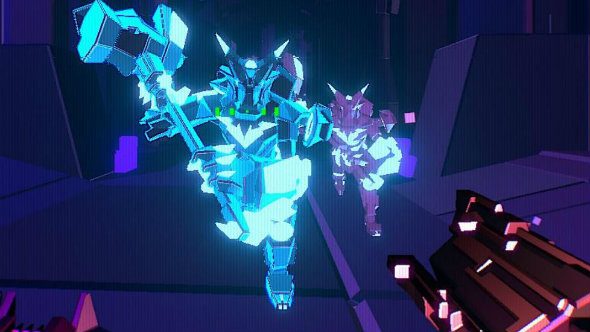 DESYNC grabbed our attention with its old-school, first-person, hyper-speed gunplay, combined with the beautiful artwork which has more neon than the Vegas strip. But what really makes it unique is the “Combination Kill” system, and the trailer released today demonstrates exactly how this works.

There are already far too many first-person shooters to play, but here are the ones PCGamesN gives the nod to.

As you can see from the trailer above, which also has a rocking alt-synth/techno soundtrack from the game’s music producer Daniel Deluxe, the combat isn’t just point, click, explode. Instead you can use a myriad of methods to get “creative kills”, such as using one weapon to break through an enemy’s force-field, then another to obliterate them.

Or perhaps you’d prefer to slow them down with a time-bending bullet, before blasting them into pixels with a rocket/glowy orb launcher? Chain enough of these together and you’ll get combination kills. It’s obvious the game has borrowed from third-person action games such as Metal Gear Rising: Revengeance in its combat system; we’re just surprised we haven’t seen more of this in other shooters.

Check out the full game page right over here. The full game comes out on Steam on 28th of February, and we can’t wait to see if lives up to the many awards it has already won at events such as PAX.