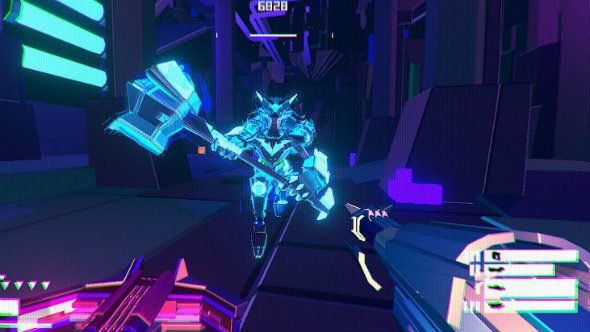 DESYNC takes the speed of DOOM, the colour palette of Tron, and the soundtrack of an early 90s rave, and mashes them into one of the coolest shooters we’ve seen in a while. And now we know when it’s coming out, with a February 28 release date just announced, at just $14.99 via Steam.

Worried this fast and frantic shooter might be a bit too much? Why not try these other favourite first-person shooters?

DESYNC is one of the most ambitious indie shooters we’ve seen in a long time, and now we know when it’s coming out, with a February 28 release date. Made by The Foregone Syndicate from Melbourne, Australia, it’s been a favourite at several of the last few PAX shows, which is where I first got to go hands on with its unique blend of high-speed shooting action and combo-based combat.

If you thought the latest DOOM was fast, you ain’t seen nothin’. DESYNC speeds around like a six-year old who’s just eaten a bag of sugar with a Coca Cola chaser, and the incredibly unique art style further helps set it aside from the burgeoning masses of super-realistic graphics seen in most of today’s shooters. If you don’t believe us, just check out the latest release date announcement trailer to get a taste of the action, all of which can be yours for a mere $15:

Hit up the official website to find out more about this game.