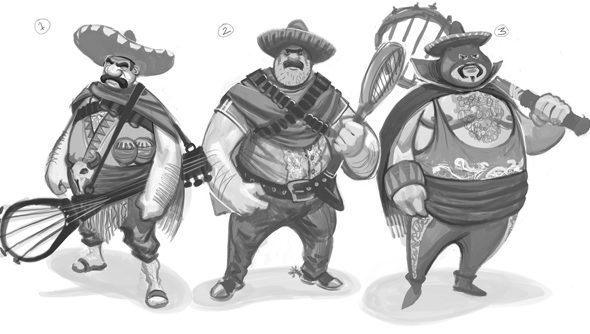 We weren’t sure we’d hear anything new out of Facepunch this week. Garry ‘sMod’ Newman recently announced his intention to reveal some of the little games his studio has been working on – but elements of the Rust community leapt on space shooter Riftlight last week as evidence that Facepunch weren misusing their manpower.

Thankfully, Facepunch programmer Ian James hasn’t been scared off. He’s built a tennis prototype, and begun documenting his efforts to make a sports game he and his colleagues can “play over lunch instead of FIFA”.

“I wanted to make something different to other projects Facepunch has in development,” said James. “I’m more of an arcade game developer so wanted to play to those strengths. I also love games with strong local multiplayer modes.”

The game as it stands is “functional” – a working local and online multiplayer tennis game built around a set of special moves. Ice freezes your opponent on contact; Tornado thwacks the ball in a random direction; Teleport switches the ball’s position mid-flight; and Fireball is, well, a fireball.

James has coded a system to replace Unity’s default physics engine, that allows for backspin, topspin and curve shots. He’s also planning a fighting genre-style roster of playable characters – each with their own move sets and associated courts.

“Some characters will be nimble around the court but with relatively weak hits whilst others may be more cumbersome but pack a heavier return,” he explained.

“The characters won’t look like typical tennis players, so no Wimbledon starch white shorts here. We want to build a selection of characters that could star in their own games in the future or perhaps play different sports.”

There’s a video up on the Facepunch blog.

James is “toying with” the idea of having court environments influence play, which sounds very deucy indeed. Will you be following his hopefully-weekly updates?