Ports have always been a problem for PC. Often non-existent or riddled with bugs, they can make us PC gamers left out in the cold. They’re a problem for developers, too. NFusion Interactive originally made Deus Ex: The Fall strictly for mobiles but they were then asked to port it over to PC. On its arrival – despite being a solid game in our Deus Ex: The Fall review – it was panned for its dated graphics and complex control scheme.

I spoke with nFusion’s Jeff Birns and Joe Parisi about the problem with ports.

“With the example of Deus Ex: The Fall, it’s just a direct port,” Jeff says. “Control schemes were put in for the PC and I think the initiative Square had there was they wanted to put it up for all the people who didn’t have it on the tablet.

“But, of course, there are expectations.

“On a mobile platform the game is pretty fantastic, I’m talking from a technical standpoint. But if you take a game and put it on a PC platform, which is a lot more powerful, then expectations are really high. If you don’t up the game to match that level then players will have a negative reaction to it.”

The Fall does look great on tablets. When I first saw it I was stunned by what mobile hardware was capable of. However, on PC it looks like something we would have played back in 2006. It’s by no means unplayable but when we’ve got Human Revolution to compare it to it doesn’t hold up.

It doesn’t help that the temptation to simply release a mobile game on PC can be strong. It’s very easy to do.

“Anything you put on mobile, other than controls-wise, you can get on PC without much trouble,” Jeff says. “It’s just changing the controls.”

In the case of The Fall that led to a complex control scheme that was still tied to the idea that the player had a touch screen. 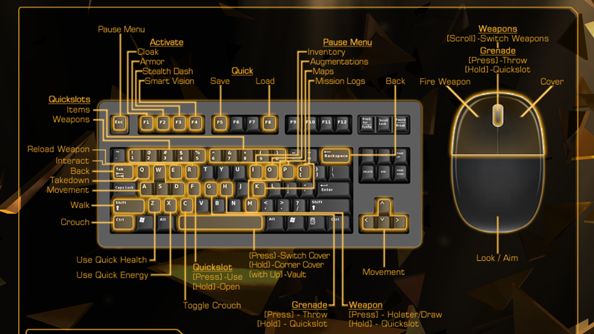 “It’s not just one-to-one, like ‘Give it better graphics. Oh, now it works for PC,’” Joe adds.

“Even down from how the game plays to the controls, there’s a lot of things you can do on a mobile device which are very forgiving,” Joe says. “Especially if you’re talking about a first-person shooter, or anything where you need to navigate 3D space and shoot things. You have to cater to it. If the AI is too good the game is going to be frustrating. You make these sacrifices to make sure the game is enjoyable for anyone to play. Sometimes that doesn’t translate well when you take it to another platform.

They’re learning from this, though. Their next game, Space Noir. “It’s made as a PC game,” Jeff explains. “This is the first time we’ve made it as a higher end platform and brought it down to mobile.”

“We decided that early on,” Joe says. “We’re not making any sacrifices on PC so that it can run on other platforms. We’re taking the harder route, we’re doing the extra work so that it runs on mobile. We’re not doing the optimal approach for doing both at the same time. It doesn’t work: you end up with something in-between and players know that. You have to do them both separately.”

To that end Space Noir will look best on PC and its controls will be tailored to suit our keyboards, gamepads, and mice. I’ve had a play of the GDC demo and the space shooter-y is a perfect match to a Microsoft’s 360 pad. The demo doesn’t give much indication of how noir the story will be but Jeff and Joe assured me they’ve done their research.

“It has all the major Noir pieces,” Joe said. “Fatalism, betrayal, femme fatales, crime, money. All that type of stuff. As we started making the initial combat demo we had Blade Runner playing on our TV in the office. It bleeds into the story missions”

“You know how Wing Commander was always focussed around a story?” Jeff says. “Especially the later ones with full motion video and Mark Hammill. We looked at that in combination with Starcraft 2. There’s a lot of stuff going on between the missions that’s framing them all. That’s where we brought in these elements.”

You’ll be able to play Space Noir later this Summer.