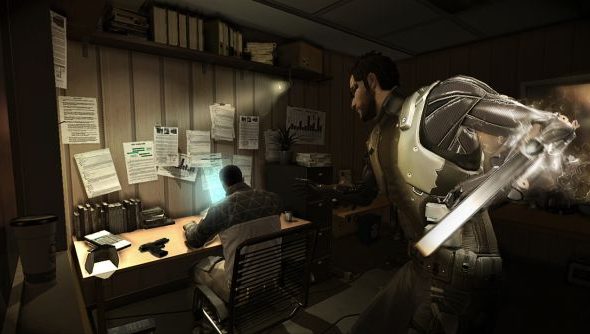 When Deus Ex: Human Revolution was first released, it rightfully won a spot in our hearts and heads for its canny world-building, player agency and intellectual rigour: in short, for recreating the qualities we’d loved in Ion Storm’s original over a decade earlier.

But that was 2011. Back then, games were still in black-and-yellow. Now, in the dystopian near-future of 2015, the sense of surprise that this sequel succeeded at all has faded – and Human Revolution’s Director’s Cut is most striking on the occasions it eschews the vents to stride boldly out of cover and do something for itself.

The changes wrought by last year’s Director’s Cut are not all immediately apparent. The textures are a bit nicer: if you weren’t a fan of the game’s honey hue four years ago, the upgrade isn’t going to endear you to it. On the other hand, you’ve a new excuse to study some of those elaborate ceilings if you needed one.

Temporally, it makes sense – the extended mission is set during a period when, in the 2011 game, Jensen went dark and the plot jumped forward. Pacing-wise, it’s a problem. 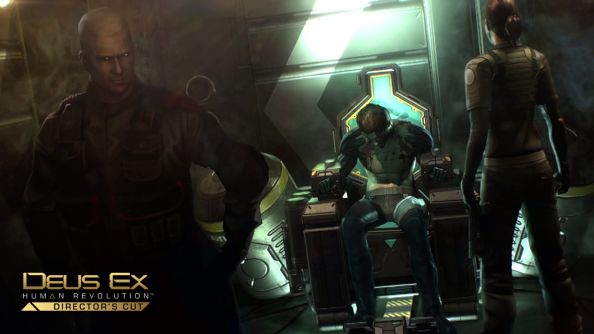 The Missing Link was an extra helping served two months after the first wave of Human Revolution buyers had played it to completion – and in that context it was sensible to strip Jensen of his augs and let players rebuild their protagonist in the way they saw fit. Included as part of the main story, however, it doesn’t half take the wind out of the story’s sails.

That said, it’s as strong a playground as any other in the game. The Missing Link invokes Splinter Cell: Chaos Theory – either because it’s tightly constructed for stealth-action, or because it begins on a ship in a storm – and that’s no bad thing.

The Director’s Cut also fiddles with those infamous boss fights – outsourced before the 2011 release to another studio and publicly denounced by Eidos afterwards. And they are better: no longer simply exercises in emptying ammo into the game’s Metal Gearish cast. When fighting electrified slide-tackler Yelena Fedorova, for instance, hackers and sneaks can now turn turrets to their will or guide toxic gas into the room.

But ultimately, they remain jarring – estranged from the open ethos adhered to elsewhere. The first boss fight, with beefy Barrett, still ends with a cutscene in which your arm-blade goes through his jugular. It’s a blow to the throat, too, for anybody who’s spent the previous hours doing their utmost to avoid killing their enemies. 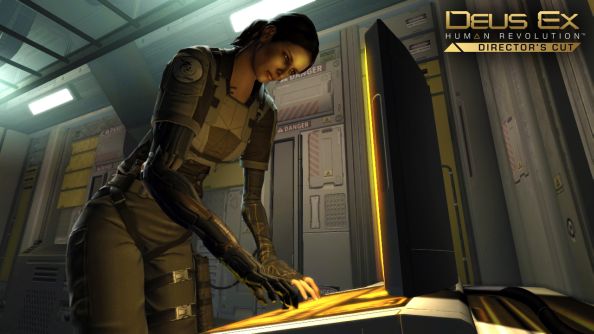 By contrast, The Missing Link’s boss fight was designed in Montreal – and provides a more optimistic view of what to expect in a sequel. “There’s no way off this base except through me, Jensen,” insists psychopath military man Burke. But pacifist options exist – defences can be disabled, goons dodged, and Burke himself knocked unconscious rather than knifed.

Do you remember the set-piece conversations? Playing today, that’s one aspect of Human Revolution that feels genuinely new and unique. These are the game’s real boss fights – lavishly animated chats conducted in uncomfortable close-up with key characters. The player is aiming to extract information or help, and their subject usually attempting to steer them away from it.

The NPC arguments are picked from a pool of pre-written phrases, but their exact order is unpredictable. In practice these meetings are less like verbal combat than curling matches. As Jensen, you do your best to nudge the conversation in a persuasive direction.

The right augmentations will allow you to see the workings of the system, or wear (presumably) a comedy flower full of pheromones and bypass the whole affair. But it’s far better to leave the cogs in the background and try to work your way through to a character’s empathy chip, or ego, by watching their reactions and responding accordingly. These days, gaming’s allies and villains are regularly rendered in three-dimensions – but we’re rarely asked to consider their motivations under the microscope like this. 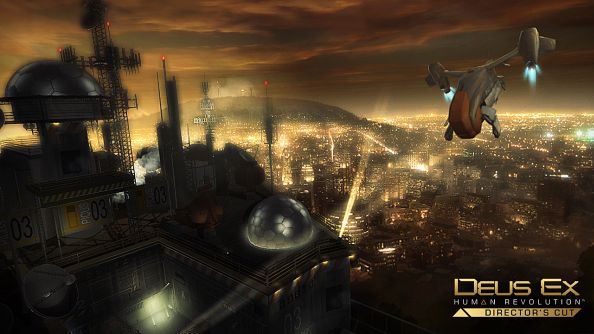 Another ingredient of the game we’d like to see expanded on next time comes as you enter the vertiginous lobby of Sarif Industries for the first time. David Sarif calls up Jensen’s in-brain phone to ask for help. He’s sorry to pull the gravely-wounded head of security out of recovery early, but a hostage situation involves his staff and requires immediate intervention. The corp boss asks Jensen to join him in his office, tout suite.

Stuff that, says the player. I know how this works – I am all-powerful and the passage of time is at my convenience. Jensen then spends 15 minutes pootling about the mezzanine and reading other peoples’ emails in glass-walled offices, until an irate David calls back to say that his tardiness has resulted in the premature deaths of no less than six innocents.

It’s a quite startling statement of intent – a lesson that heavy consequence can come from inaction as well as action. It’s just a shame that Human Revolution doesn’t deliver more of the same urgency later.

Compared to other shooters of the age, Human Revolution’s pacing is undeniably ponderous. It’s a game about sitting in corners, considering your options – and sometimes initiating a takedown once a guard reaches the end of his patrol path. 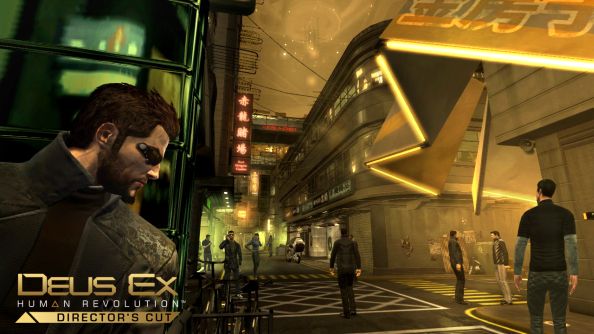 Splashes of all-out violence, when they occur, are clumsily satisfying. The Rainbow Six: Vegas cover system just works; pulse-powered shotguns splay ragdolls in pleasing fashion. But there’s a sense that they’re not to be enjoyed so much as resolved as quickly as possible. While Deus Ex really does support any approach, stealth is its default.

That philosophy’s at odds with the adaptability of Deus Ex’s new relatives in the first-person genre. Far Cry 4 and Dishonored players have learned to relish being spotted rather than reload. It’s not a fault, necessarily, but Human Revolution is slightly out of step with the games of now.

Its slippery slope vision of mass privatisation and clashing corps, however, is not. Narrative designer Mary DeMarle and her team infused a pulpy conceit about conspiracy and machine-men with a real sense of social anxiety that’s more, not less, relevant this year than when it was written. Class division, so often farmed out to fictional proxy races in RPGs, is here tackled unflinchingly and with class.

But perhaps DeMarle and co.’s greatest work was in writing pretend emails. Somehow, Eidos Montreal deepened their world with odd reply formats and strings of forward-slashes. 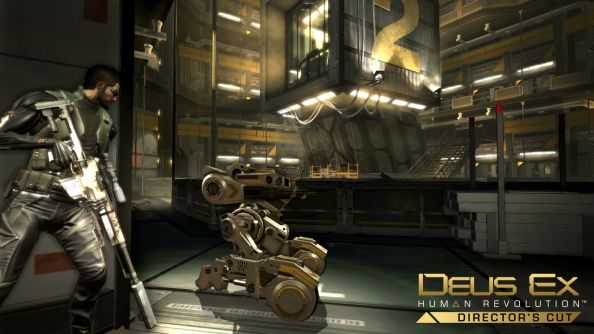 In China, missives from Tai Yong Medical administrators repeatedly reprimand employees running up against oppressive inbox limits – and contribute more to Upper Hengsha’s choking atmosphere than tens of cutscenes with machiavellian CEO Zhao Yun Ru could. The game’s acronym, HR, could just as easily stand for Human Resources as Revolution.

Tai Yong is just one corner of an intricate network of internet and intranet messages scattered on PCs throughout the game – testament to what an empowered writing team can do with a restrictive form.

Just to be clear: Human Revolution is still a stonking game. If you’ve followed Eidos Montreal through their piecemeal Thief reboot, you’ll come back to their debut with an even greater appreciation for its robustness, clean aesthetic, and dense environments. It remains a high-water mark on a measuring stick Eidos have since allowed to go dry. Let’s hope the same team can reach those levels again with the expanding Deus Ex Universe.

Until then, once more with feeling: Uh-huh, you know what it is…