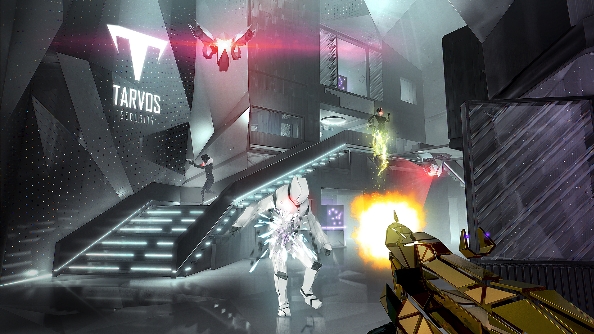 Deus Ex: Mankind Divided will come with an interesting second game mode when it releases in August, and even if we gave you unlimited guesses you’d never come close to what Eidos Montreal have created. Breach is a time-trial based arcade mode, filled with familiar Deus Ex touchstones, but unlike anything you’ve seen from the universe before.

Become an unstoppable merchant of death in the best FPS games on PC.

The developers at Eidos Montreal call Breach a ‘mode’, but I think it’s probably fair to call it a game in its own right. It has its own art style – a collection of silvers and vivid purples that stand in stark contrast to the main game’s gold and black – with heavily angled environments and boxy characters that channel SuperHot and Volume’s avatars. It has its own story and gameplay approach. Missions are short – barely five minutes – and encourage speed, efficiency, and aggression.

But why have Eidos made Breach? “One of our mantras on the team is to break expectations. You didn’t see Breach coming and you’re like WTF?” laughs executive game director Jean-François Dugas.

“We were thinking about doing it on Human Revolution: to have a new gameplay mode that’s arcade-like. A challenge mode,” he explains. “But we didn’t have the people to work on it back in the day. Now we have a bigger team to work on more stuff and it was put back onto the table.” 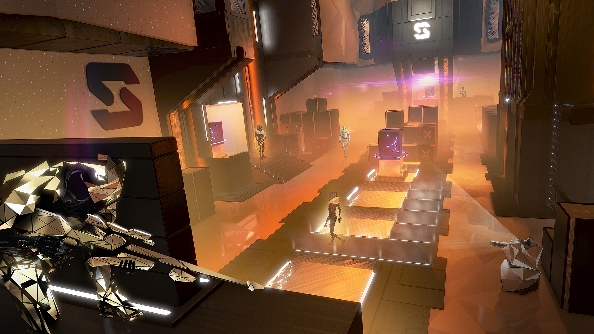 Breach opens on a map of nodes, each representing a level of the game. It looks similar to Deus Ex’s hacking screens, and that’s no coincidence: in Breach you play a hacker diving into VR worlds in order to steal data. That’s why the visuals are almost Tron-like.

Levels become progressively more difficult as you progress through the network, but they all have a basic shared structure: networks of corridors which contain large data blocks that must be downloaded. Your task is to get in, grab them all, and get out as quickly as possible. Upon hacking the last databank the area will go into emergency lockdown, leaving you with precious few seconds to make your escape.

To complete that task you’ll be using a collection of weapons and tools you’ll find familiar from days spent in Deus Ex’s ‘real world’. Aside from guns, your VR avatar can be augmented with things like super-jumps and the ability see through walls. They’re part of an upgrade system based on memory: your avatar has a few gigabytes of storage, and augments demand various chunks of that. Will you outfit with several small files, or fewer more powerful ones? 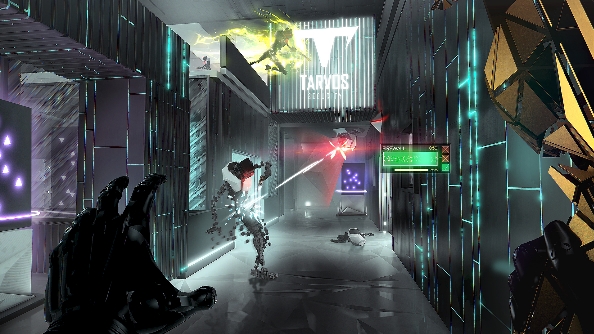 The augments allow you to adjust your playstyle within the nodes, but however you play Breach is notably more aggressive than classic Deus Ex. Even if you choose the stealth route, you’ll need to be fast rather than steady and methodical.

Over the series of missions I play during my hand-on time, I go up against some basic soldier-type enemies and turrets, with each new level deploying them in increasingly more difficult manners. Equipped with only a pistol that takes a good half-clip to destroy the enemies, it becomes a game of trying to effectively find the path of least resistance to the data you need. And when the timer is ticking, you eventually begin to let instinct take control rather than adhere to any plan you had. It’s a very, very different approach to Deus Ex.

Your avatar levels up after gaining enough experience, and each new level brings an increased amount of memory for your augments pool, as well as Praxis points to invest in the robust skill tree. Completing nodes on the network rewards you with card-game inspired booster packs, filling your inventory with health packs, ammo, and new weapons. You can also be awarded modifiers – seen as ‘cheats’ within the VR world – that can buff your damage or health for a single mission.

This may sound all well and good, but it’s no secret that much of the Deus Ex universe’s appeal comes from conspiracy-packed narratives. Eidos Montreal are very aware of that vital element, and so you’ll find a plot in Breach, too. “At some point we realised Deus Ex is about story and we needed to wrap this up into the overall lore. Even though Breach is not connected to what you do in Mankind Divided it is connected to the world and what’s going on, so we have this story wrapper around it,” explains Dugas. 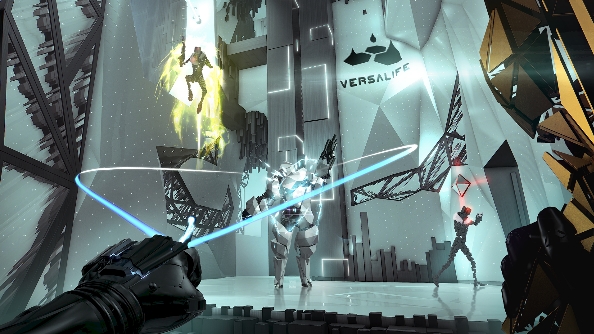 That story doesn’t appear within the context of the levels, which have a laser-focus on the arcade elements, but between nodes you’ll interact with the hacker who recruited you via a thread of text messages. Displayed like Google Chat on-screen, it helps unify the entire experience: there’s never a moment set outside the computer.

Breach, while being entirely single-player, is also the closest Deus Ex is likely to touch multiplayer. As a ‘live’ game, your best times in the nodes will be recorded and placed on leaderboards. Eidos are planning to make it a competitive experience, despite the player being isolated. “You can challenge your friends with XYZ conditions. If you accept a challenge you have to succeed to get the rewards, but if you fail the sender gets the reward instead. The leaderboards are going to fluctuate according to how the players do,” reveals Dugas.

Breach will launch on day one with Deus Ex: Mankind Divided, and will be on-disc if you buy physical. I don’t think it’s going to overshadow the main game, but there’s no denying it’s a very impressive, pleasantly surprising addition to the universe. The live element of it is the most interesting aspect: ignored, Breach could be forgotten by the year’s end. But if supported by Eidos Montreal and publisher Square Enix with regular challenges and updates, it could be the long-life extension nobody expected.