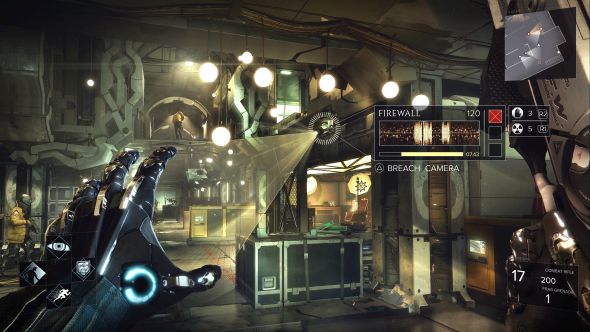 Yesterday’s launch of Deus Ex: Mankind Divided wasn’t without its hiccups. There’s performance issues on mid-spec machines and with certain settings, particularly MSAA and higher resolutions. However, more problematic for all players are reports that the mouse settings are not allowing for robust enough control. Acceleration apparently cannot be disabled, and some are complaining of far too high sensitivity even with a 0% setting in-game.

As for the game, here’s our Deus Ex PC review.

The reports popped up on Reddit to begin with, though are now more widespread. There’s been complaints through Twitter too, and the problems are apparently being worked on. Acceleration specifically is now in their known issues list, but here’s all the complaints that have been reported:

The community has already got to work trying to hack in some fixes, but the usual suspects of easily editable ini files or hidden settings aren’t proving fruitful. Digging into the game options binary file, this Reddit user has managed to create a script that allows for sensitivity to be lowered even further by directly changing values. They also say that a normal hex editor should be able to do this too. Worth noting that both that and running scripts downloaded from the internet aren’t the safest, but if you’ve got problems they’re the options available right now.

Between this and complaints about DLC and microtransactions, the game is taking a minor pounding on Steam, reviews-wise. At time of writing it sits at 64% positive, which is actually fairly good for a triple-A game with launch issues but lower than anyone would be happy with. On the flip-side, it’s not quite the wasteland apocalypse of complaints you’d see from properly widespread issues in mass-selling games, so things likely aren’t quite as bad as they might seem.

Expect an update from Eidos and Square Enix soon, and remember you can always refund if you’ve played under two hours.