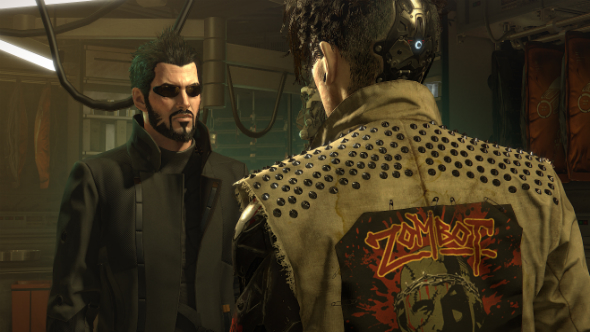 Adam Jensen’s latest augmented adventure is upon us, and it’s really rather good – if a tad compromised in a few areas. You can read the full verdict in our Deus Ex: Mankind Divided PC review, but for now, it’s time to push my imaginary spectacles up the bridge of my nose as I quizzically look at the game’s graphics settings and general performance to see if it’s a worthy port or not. Spoiler: it’s actually pretty darn good.

The PC version of Mankind Divided has been handled by Nixxes – following up the studio’s efforts porting Lara Croft’s last two games to rigs everywhere – and generally its work is pretty exhaustive. Let’s dive in for a deeper look, shall we?

Graphics and display options are numerous; everything from tessellation, HBAO, volumetric lighting to subsurface scattering make the cut. Handily, any visual tweaks you make are done instantaneously, meaning it’s a doddle to squeeze extra frames out of the game by speedily switching up your settings. That said, changing the texture quality option is slightly fussy, as the game makes you quit out to the main menu, then reload your save every time you fiddle with it. 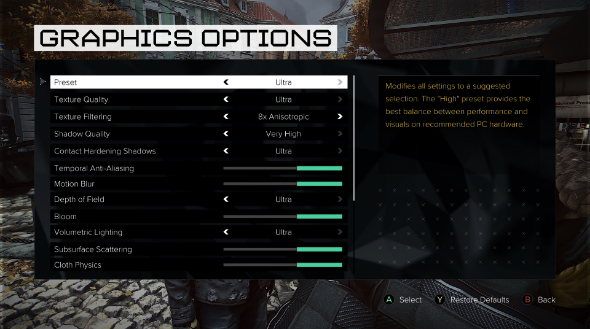 Presets-wise, you’re looking at ultra, very high, high, medium and low. In truth, there’s actually very little difference between the three highest settings, yet switching textures to ultra can cause significant performance drops, especially on resolutions higher than 1080p, but I’ll go into more detail on that shortly. A thorough suite of tweakable graphics sliders are complemented by MSAA anti-aliasing, an adjustable FOV, various supported refresh rates (from 60Hz up to 120Hz), and stereoscopic 3D – yes, apparently that’s still a thing.

Nixxes earn further brownie points by giving you a hell of a lot of HUD options. Almost every one of Jensen’s on-screen meters can be turned off entirely or set to a timed fade out, including his health, energy and weapon bars, ammo counter and radar. For those you who aren’t a keyboard and mouse-hating freak like me, there’s good news in that you can remap every one of the major key bindings to completely remould the controls to your liking.

A DirectX 12 mode has also been included, though its not scheduled to be fully supported until around September 5th… which probably explains why the game ran identically for me regardless of whether I had it switched on or stuck with DirectX 11. That’ll have a big impact on visuals and performance for those with DX12-compatible cards, though. On a cheerier note, Mankind Divided offers 21:9 support, and the game looks truly glorious on my ultrawide Acer 34-inch monitor at 3440×1440.

For the performance and preset results below, I ran the game at 1080p. So without further ado, let’s crack on looking at how the game runs at different presets – click on the links below each of the images for the full-size screenshots. 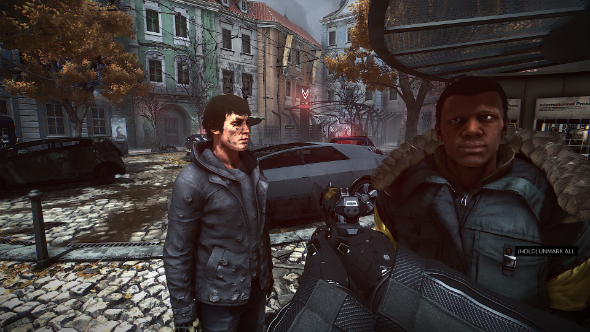 With all graphical options ramped up to their highest settings, Mankind Divided looks just peachy. The game sports a wonderfully weathered look, and the streets of its dystopian Prague are so detailed you can almost smell the dampness of its permanently moist, cobbled streets. The addition of bloom, ambient occlusion and contact-hardening shadows (which soften shadows further in the distance) lends image quality a lovely depth and richness. Oddly though, there’s almost no difference between the game’s ultra, very high, and high texture quality options.

In terms of performance, the action mostly sticks to the mid-80s for me, with occasional drops to the lows 70s in more demanding areas, like Task Force 29’s bustling HQ. Less demanding locations, such as Mankind Divided’s many disheveled apartments, run higher, and I occasionally see jumps to 100fps with certain indoor areas.

A word of warning for ultra or any other preset, though: turning on MSAA absolutely nukes performance. At its x2 setting it chopped my framerates down into the low 50s, at x4 the low 40s, and at x8 into the high teens – so flipbook territory, essentially. My advice? Leave MSAA off and go with temporal anti-aliasing instead. Not only does it do a decent job at keeping those jaggies at bay, but it only incurs a very minor performance cost. 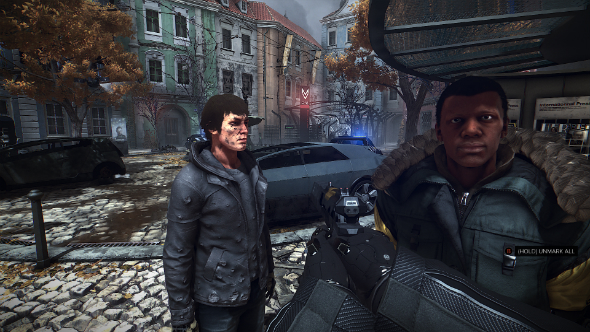 Drop down a notch and visual differences are… well, pretty much non-existent. Knocking back the level of detail setting may mean there are a few less bits of rubbish on the pavement in front of you (and those trees in the distance perhaps cast a shadow or two less), yet really, you’d need ungodly obsessive Terminator eyes to notice the difference between very high and ultra.

As for performance, there’s little change, either. Running around Prague’s oppressive streets yields framerates that hover around the high 80s, and sometimes the low 90s. Of course, there’s more of a performance gap between very high and ultra when playing the game at 4K, where dropping texture quality down to its second highest claws me back a good 20fps in many areas. 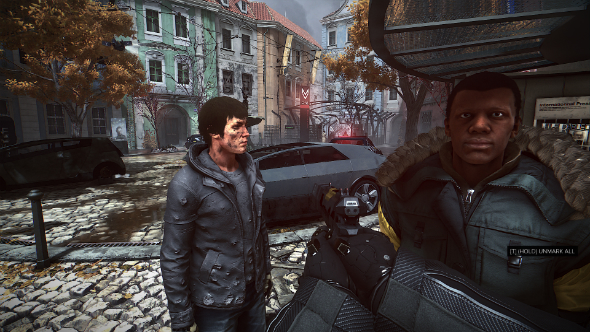 Not to sound like a stuck record, but the drop from very high to high produces changes that are once again absurdly hard to see. Bloom is reduced a smidge and shadow detail is a little less rounded, yet on the whole high is remarkably close to the last two, more performance-sapping presets.

In terms of framerates, the action mostly hovers around 100fps. Areas around the city metro stations, which are usually patrolled by a number of police, see drops to the high 80s, though stutters are definitely less common than on ultra or very high. 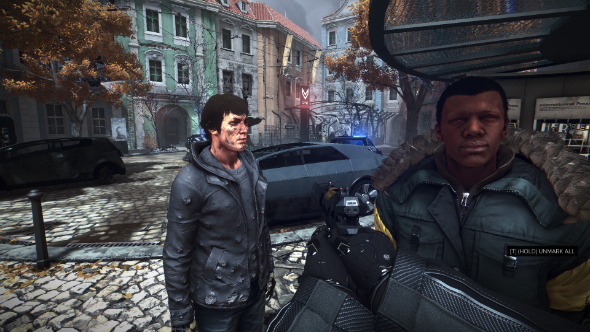 Switch to medium and the visual compromises begin to stack up. Shadow detail noticeably drops, while overall image quality begins to look a little muddy. There’s still a decent amount of object detail in the background, but there’s no question the game looks flatter when you get down to the second lowest preset.

Thankfully, these visual cutbacks leads to some decent performance gains. Compared to high, the medium preset runs at around 110fps, with only very minor drops in areas with more NPCs. Still, the bump in performance probably isn’t worth the compromises in image quality. 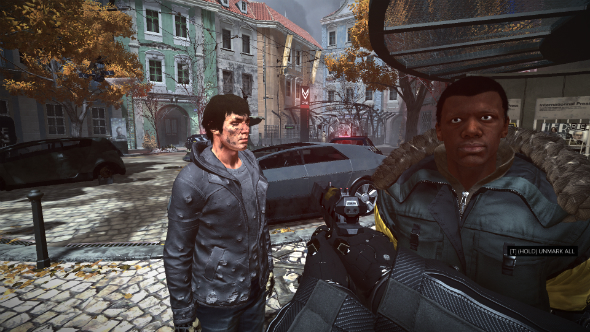 Gah! My eyes! My beautiful eyes! Actually, slumming it on low isn’t too painful on the old peepers. The main visual hits comes with the fact temporal anti-aliasing is switched off, meaning jaggies begin to dominate. At the lowest preset, shadows are pared back big style, while textures look pretty damn muddy, though Mankind Divided’s strong art direction means the game still looks reasonable.

Played at low, the game normally runs at around 120fps, and the action never once drops below the 110fps mark for me. It’s a pretty substantial gain from the medium preset, though considering Deus Ex is hardly a twitch shooter, you’re probably best off ramping up a few graphics options at the cost of 15-20 frames.

Bump up the resolution to 4K and the drop in performance is hefty. Luckily, the action looks glorious at 2160p, and the increase in raw pixels makes the game’s already strong art assets utterly sing. Character models are particularly striking at 4K, and picking out every strand of Jensen’s overly stylised haircut is a pleasure. If you’ve got the rig to support it, it’s hard to go back to 1080p once you’ve seen the game running at ultra-HD.

Of course, you’ll need one hell of a PC to run the game at 4K with playable framerates. Even though I own two GTX 1080s, I could only utilise one of my cards because the game doesn’t yet support SLI. Played at 4K, the game mostly hit the low 40s for me, though drops to framerates around the mid-30s wasn’t uncommon. If you’re playing on an ultrawide 4K monitor, running the game at 3440×1440 is decidedly less demanding; played at this res, I can run Mankind Divided at a pretty much locked 60fps. 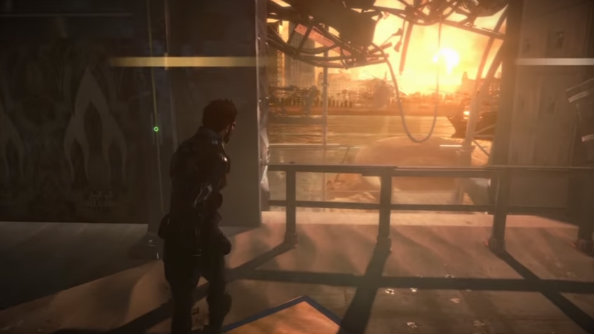 Overall, performance is more than reasonable, though I suffered some frame-pacing issues in areas packed with NPCs, regardless of graphics settings or resolution. Hopefully Eidos Montreal/Nixxes will patch in SLI support soon, but for the time being those with GTX 1060s/970s or above should be able to run the game at a smooth 60fps at 1080p with little issue.

In terms of the breadth of graphical options and the immediacy at which you can switch between them, there’s almost nothing to complain about. Here’s a quick rundown of every setting you can tweak *deep breath*… texture quality; contact-hardening shadows; temporal anti-aliasing; motion blur; depth of field; bloom; volumetric lighting; subsurface scattering; cloth physics; ambient occlusion; tessellation; parallax occlusion mapping; sharpening; chromatic aberration; level of detail. Annnnnd breathe. I’d definitely recommend turning on the ‘sharpen’ setting, as without it, image quality can be a touch blurry.

Couple those oh-so generous graphics settings with a fully customisable HUD, ultrawide screen support and remappable controls and Mankind Divided really is a thorough PC port. Those frame-pacing issues grate slightly, but they’re a fairly minor issue when you consider the amount of technical wins this new Deus Ex stacks up. The game itself may be a little half-baked (especially when it comes to a lack of locations), but the PC version has been crafted with the utmost respect.