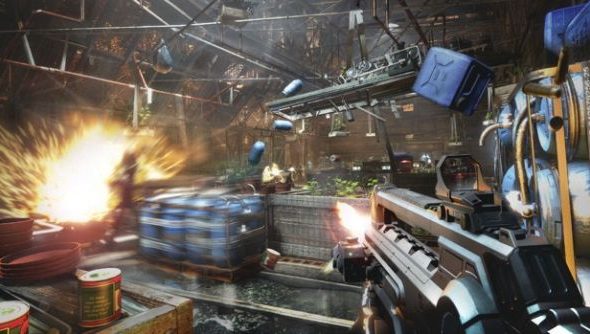 When Eidos Montreal made Deus Ex: Human Revolution, they were also building a studio from the ground up. That it turned out so well in those circumstances is remarkable – and bodes well for what they’re balancing atop the foundations in Mankind Divided.

“Having everything behind us is a big, big buff,” executive producer Stéphane Roy told PCGamesN. “Because we know that we need more of this and less of that.”

There’ll be no fewer opportunities for stealth – but there’ll be more and better support for open combat.

Mankind Divided’s announcement trailer climaxed with a slow-mo stabbing sequence courtesy of Adam Jensen – and there’s a reason for that. Eidos have addressed some of the problems players had with combat in Human Revolution, and want us to know it.

“A lot of people told us that they had the feeling that you had to play the game in stealth,” said Roy at E3. “And so we said this time that we really want you to play it like you want, and you’re going to be able to do that. We did this to make it what people want.”

That doesn’t mean less emphasis on stealth – simply more viable options for both lethal and non-lethal fighting outside the vents.

“We are still putting it all in,” said Roy. “We’re just making sure that no one says that we lied and that you cannot see everything without stealth.”

Eidos are working to make the noisier approach more attractive, too, with gadgets like Jensen’s new gun-arm.

“The goal is to make the player feel that playing the game this way is really unique,” explained Roy. “It’s not just shooting a gun – more like you are the weapon.”

In Mankind Divided, many of Jensen’s opponents are augmented too – rendering shooting a less straightforward and more dynamic affair.

“In this game it’s not just you, it’s also a lot about the enemies,” said Roy. “The more you play, the harder your enemy will be and move around a lot like you.”