There’s a naked butt that appears in the PC version of Devil May Cry 5 that many PlayStation 4 owners won’t see, as their edition of the game demurely covers it up with some strategic lens flare.

The bum belongs to Trish, a demon who has taken a woman’s form and who has appeared throughout the Devil May Cry series. It seems as though a cutscene that briefly shows her buttocks is coyly censored in the PlayStation 4 version of Devil May Cry 5, while it’s shown uncovered in both the PC and Xbox One versions.

I’ll make two notes at this point: Firstly, I’m informed via Eurogamer that describing this scene will involve spoilers, so if you’re planning on playing Devil May Cry 5 and don’t want to know about any of its story beats, you may want to head back to the homepage. Second, I haven’t played Devil May Cry 5, so this is all pretty second-hand.

That out of the way, there’s a cutscene in which Dante rescues Trish as she’s being held in a trance of some kind inside the torso of a large demon. As she falls out of the demon’s body, it becomes clear that she’s not wearing a stitch of clothing, and her bottom is briefly visible as Dante lays her down on the pavement.

In the Western PS4 version of this scene, however, Trish’s butt is obscured by added lens flare from the headlight on Dante’s motorcycle. You can see a side-by-side comparison in the video below: 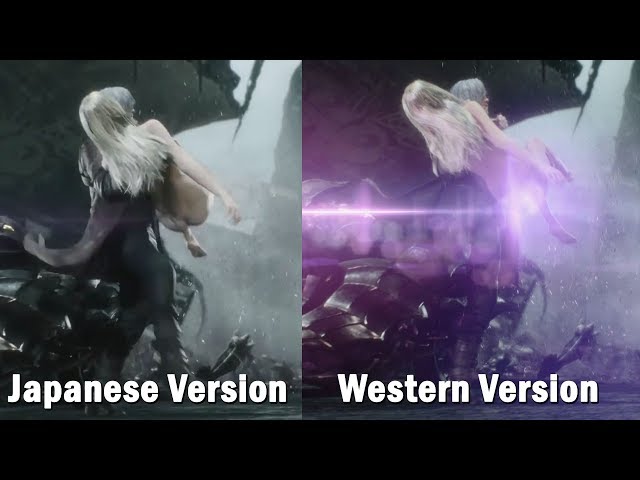 As commenters point out though, other scenes in the game have nudity strategically concealed on all platforms in all regions, and that it’s unclear why this specific instance required a change on PlayStation. Further, as an M+/18+-rated game, there’s (in theory) some tolerance for a bit of PG-13 level nudity in the title. However, the alteration doesn’t cut anything meaningful out of the game or detract from the story, so it’s a bit of a wash.

In any case, the bottom line here is that Capcom apparently didn’t feel the need to change the scene for PC or Xbox players.