Devil’s Third has been underwhelming Wii U owners for a while now, and it seems like it might almost be time for it to land on PC with the same limp thud as one of its dismembered bodies.

If you don’t fancy playing a game that’s probably not going to be very good, why not play through our list of the best games on PC.

Mercifully, PC won’t be getting the full version of Devil’s Third, complete with its awful single-player where you play as a Russian man called Ivan The Terrible – he really is terrible. Devil’s Third Online will be just that: the online portion of the game, adapted to shove a bunch of microtransactions down your throat.

In this free-to-play shooter, expect to switch between third and first-person, the former for hacking and the latter for shooting. You can stealth kill enemies, engage in sword fights, or sit and pick them off with controlled bursts of gunfire from range.

In the Wii U version, nothing felt quite right, but perhaps Valhalla Game Studios have taken advantage of the extra power of the PC to make it actually work properly. Who knows.

If you fancy giving it a go, head over to the site and download it. It’s all in Thai, but Google translate is here for you.The recommended specs for the beta are below: 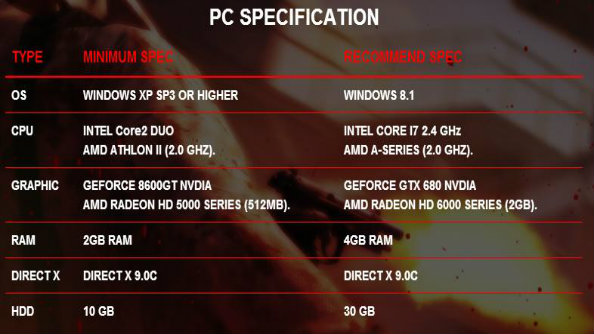