Spoilers for Devotion and Gone Home follow: A red umbrella is floating in a hall. It glows intermittently as the light above it flickers. Whatever looms below is smothered in shadow and hard to see. With only the sound of rain in your ears, you stagger down a damp, narrow corridor until the umbrella’s red handle becomes visible. No one is holding it.

The umbrella turns into a pair of red high heels, and the room undergoes years of rot and decay in the moments it takes the shoes to hit the ground. Writing etches into the walls in blood, and you turn around to find the ghostly remains of somebody bathed in the red glow of the light above. Before you get too close, they spring to life and swiftly float through you. Just before they disappear, you’re given a glimpse of someone who looks like your wife.

While the brief encounter delivers a jolt of fear, it’s the lingering curiosity and worry of what’s gone wrong that stays with you. Not long before entering the corridor, you’re given a snapshot of society’s mundane idea of the perfect life. You’re on the couch watching the news on some old TV while your wife cooks dinner in the kitchen. She’s gloating over how well behaved your daughter is after hearing someone’s grandson come home late – the implication being that he’s in with the wrong crowd.

As your head begins to pound and your hands start to quiver, you soon find yourself ripped from that reality and placed in another, albeit familiar, one. It’s the same room, but it’s dark and cold. After some wandering around, you walk through a door and find a red umbrella is floating in a hall.

Plenty of horror games deliver their thrills by perverting the physical appearance of a home. Fewer, however, nail that subversion with the crunching realism of what can turn a family’s relationship awry. Devotion invites plenty of comparisons to Hideo Kojima’s PT due to the tight layout of the apartments and some familiar themes. The fear of falling short of your idea of a good family member, though, puts me in mind of Gone Home.

Set in 1980’s Taiwan, Devotion tells the tale of a father and husband who has crumbled under society’s expectations. It’s about a scriptwriter called Feng Yu whose star has faded following consecutive flops at the box office. Propping him up was his wife Li Fang, a beloved actress obliged to play the role of a housewife despite being the abler of the two. Stuck between them is their daughter Mei Shin, a child who poses the talents of her mother but struggles with the expectations of her father.

You learn this as you pass through their home at different points in time, looking through the perspective of Feng Yu. The flat feels uncomfortable to move through due to a narrow design that obstructs lines of sight. What’s truly unsettling, though, is feeling that you’re the one haunting these halls. 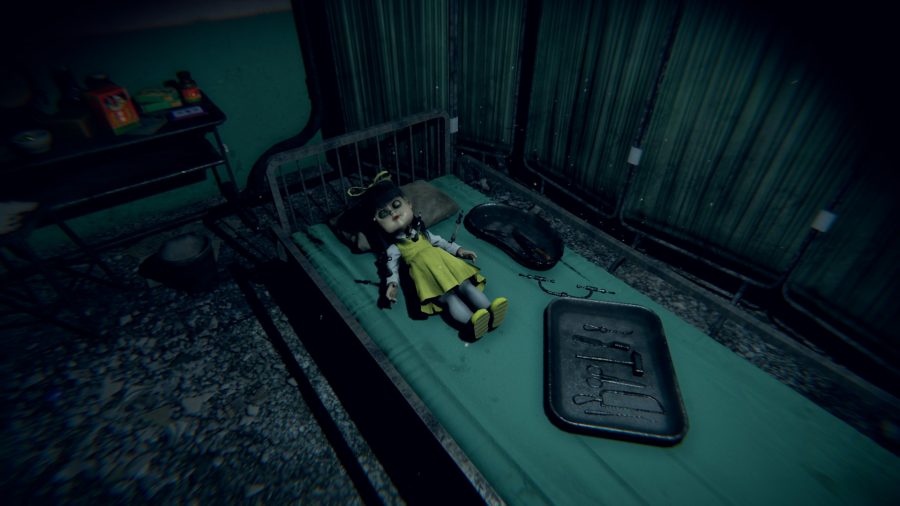 Through your wandering you encounter a doll that looks like Mei Shin. It soon becomes apparent that it represents your objectified view of your daughter. A letter reveals that you’ve pulled Mei Shin out of a school trip she was looking forward to as you deem it important she practises her singing so she can take the top spot at a local talent show.

Gone Home isn’t a pure horror game like Devotion, but it seems to understand how cathartic it is to release your fear

You also learn that she’s become sickly and often struggles to breathe. Doctors claim that nothing is wrong physically, and that you should consider psychiatric evaluation. Due to the stigma around mental health in the ‘80’s, however, you take the suggestion as an insult to your pride – turning, instead, to throwing what little remains of your money at faith healing.

What turns the horror into tragedy, though, is a tender passage in which you recall reading Mei Shin a book. She doodles on pages in crayon, making the story gentler for its characters. She solves a fight between two deer by giving them glasses as she believes they were bumping into each other because they couldn’t see. The story ends with the daughter in the book curing her father’s injury with a mystical flower. After you put the book down, you fold origami flowers together out of the pages of your failed scripts. It proves to be a pleasant memory for Mei Shin as afterwards the act of folding flowers eases her anxiety and helps her breathe. She leaves one of them for you at the end of the book, but you never find it as you never read to her again. 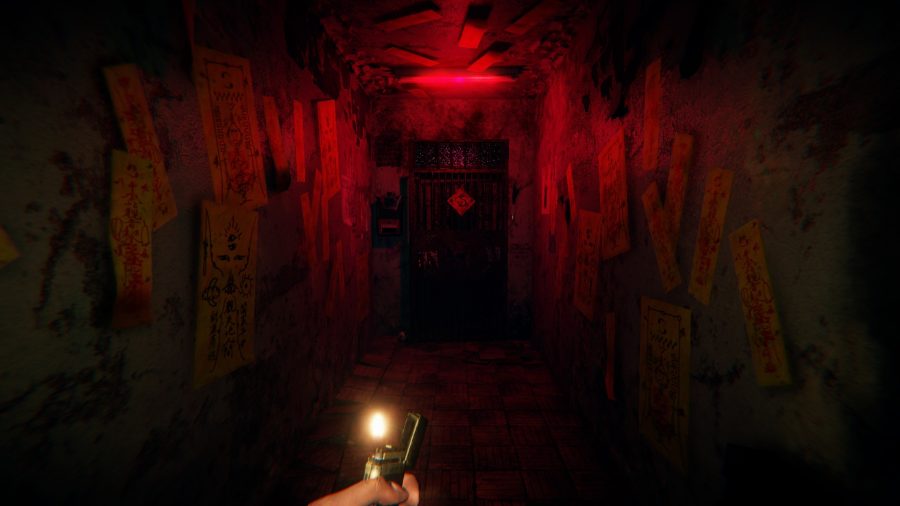 Li Fang’s depiction as an evil spirit can be seen as another representation of your stubbornness. You’d be forgiven for assuming the roles are reversed thanks to the earlier scene in the hall, but you gain a broader perspective as the story unfolds. As you continue to struggle to sell scripts and pay your bills, Fang resorts to borrowing money from family before looking for work to help provide. Rather than accept her aid, you take it as a stain on your character. When she challenges your decision to give up your remaining funds to faith healer Mentor Heuh, you convince yourself that she has become possessed. As you fail to look past your pride, she is driven to leave, and your daughter has no idea why. While Devotion has its share of jumpscares and gory moments, it’s your guilt at driving your family apart that makes it harder to continue.

Now, Gone Home doesn’t put you at the heart of the Greenbriar family’s disintegration, but it inspires a similar feeling of guilt as you weren’t there to help hold it together. Much like Devotion, though, this is realised through the objects you come across and the things you find while wandering the halls of your family home.

You’re in the shoes of Katie this time around, and you’ve just returned from an overseas trip. The first thing that greets you is a note from your younger sister telling you that’s she’s gone, and that you shouldn’t try to find out why. Searching the house for Samantha reveals that your parents Terry and Janice are also missing. As you sift through crumpled notes, printed out letters, and tossed aside brochures you realise all three of them are struggling with life’s hurdles. 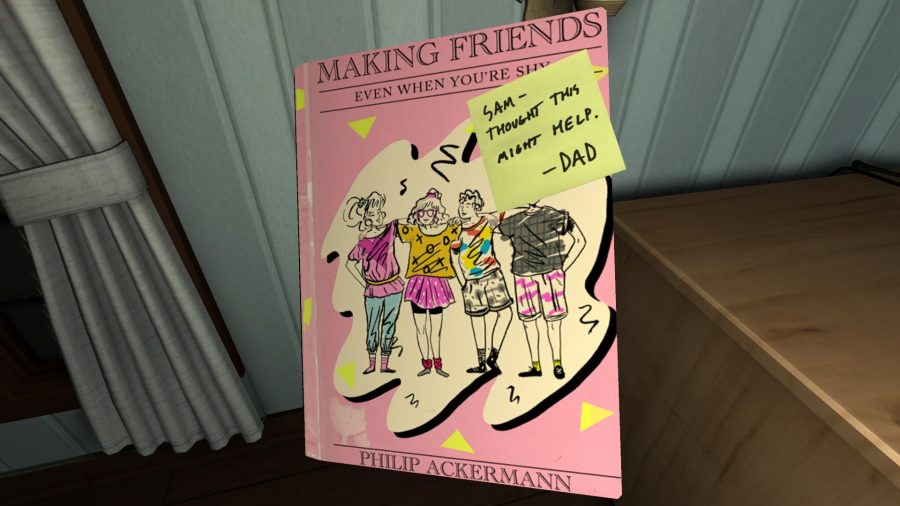 Sam jots her thoughts down in a journal as a replacement for talking to you directly. As you find more pages from it, and other bits and bobs, you learn that life at school has been difficult. Your new family home was passed down to your father after his uncle passed away, and the other kids put together a rumour that he went mad. Branded as the girl from the “psycho house”, Sam feels isolated until she meets Lonnie DeSoto. While their bond offers a slight reprieve, your parents struggle to accept Sam for who she is after she realises her feelings for Lonnie.

Your parents are having a tough time of it, too. Terry is a struggling author who turns to reviewing home electronics at the recommendation of a friend. It’s not going particularly well, and another letter reveals he could be cut at any minute. Janice is also at a crossroads in her life, and books and letters point towards her having feelings for someone at work. As you delve deeper into the house, you find a letter from Terry to Sam saying they’re off on a weekend retreat. A scribbled-upon brochure later confirms it’s marriage counseling.

Sam is stuck between Terry and Janice’s problems, which makes your guilt at not being there for her stick. As she realises her feelings for Lonnie, Janice insists she returns the calls of a boy from her childhood. If you had been there, she might have had someone to talk to who would’ve understood her better. 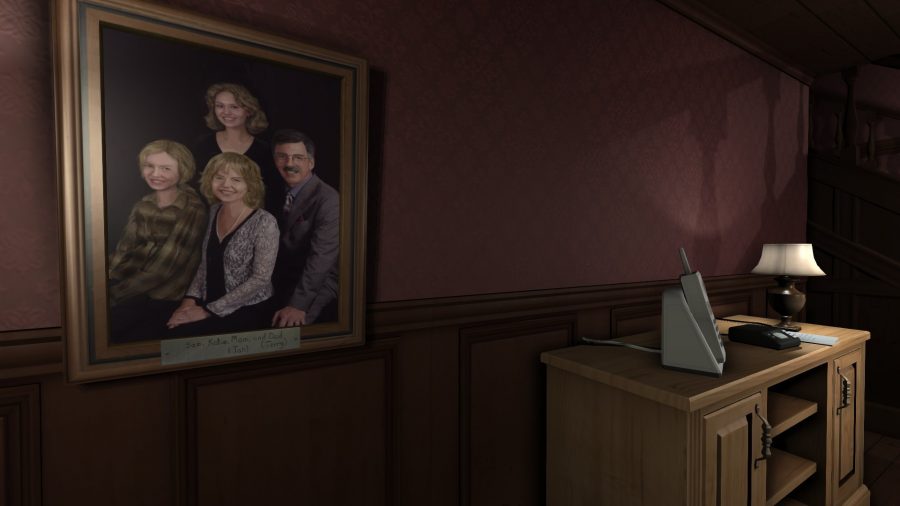 Gone Home isn’t a pure horror game like Devotion, but it seems to understand how cathartic it is to release your fear. One part of Devotion has you enter a version of your flat that’s haunted by your wife. You can hear that she’s somewhere, and you know something will happen, but once you turn the corner and find her waiting, you feel at ease once the scare has passed. What you were afraid of was either real or not, and you’re no longer stuck in between.

Gone Home isn’t a pure horror game like Devotion, but it seems to understand how cathartic it is to release your fear

Gone Home has its own spin on what a build-up of fear can do. Guilt and worry skewer the way you see your home as you try and find out what happens to Sam. You stumble into the bathroom to find a bathtub stained red. Naturally, it’s red hair dye but everything that comes before leads you to fear it could be something more sinister. When you eventually come to the end of the game, and find out that Sam is happy and has run away to be with Lonnie, all that fear releases in a different, albeit similarly cathartic way to Devotion’s jumpscares.

One of the more sadder ways Devotion and Gome Home differ is their potential to stand the test of time. As the decade comes to a close Gone Home has received plenty of plaudits for helping the walking simulator genre reach more people, and for its handling of queer themes. Devotion deserves a different sort of praise for how it meshes horror with a subtle education of what Taiwanese culture was like in the ‘80s.

While it was one of the games I enjoyed most this year, there’s no guarantee it’ll be back next year. As Devotion was found to house in-game art making fun of Chinese president Xi Jinping, it was swiftly pulled from Steam after being review bombed. I still visit Gone Home a few times a year, and can readily play Devotion, too. That won’t be the case for everyone, though, and that’s a shame.