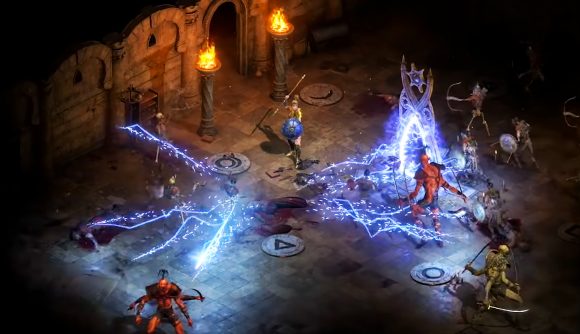 Players around the world have been struggling to connect to Diablo 2: Resurrected today, with servers going offline for hours at a time since early this morning. It’s causing some understandable frustration among the action RPG game’s fans, and Blizzard says it’s investigating the issue to determine what’s causing the server outages.

Diablo 2: Resurrected has been having server troubles throughout the weekend, particularly in the European region. Players reported login issues Saturday, which prompted Blizzard to perform emergency maintenance. More problems cropped up Sunday with Diablo 2: Resurrected authentication servers, which Blizzard said it had resolved after a few hours.

However, as of Monday morning, players are still unable to connect to the game. Blizzard’s customer service Twitter accounts have all posted apologies for the inconvenience players have been experiencing, along with reassurances that the company is working to resolve the issue. As of this writing, servers have been down for approximately seven hours today, and the Diablo subreddit has been swamped with posts from players frustrated by the narrow window of uptime they’ve had to play since the weekend began.

We’ve reached out to Blizzard about the issue and will update this story with any response.

We continue working to resolve the login issues in #D2R as soon as possible. We apologize for the inconvenience caused by today's outages.

The remaster has been plagued by connectivity issues since it launched a few weeks ago. Here’s hoping Blizzard can determine the source of the latest problem and address it quickly.