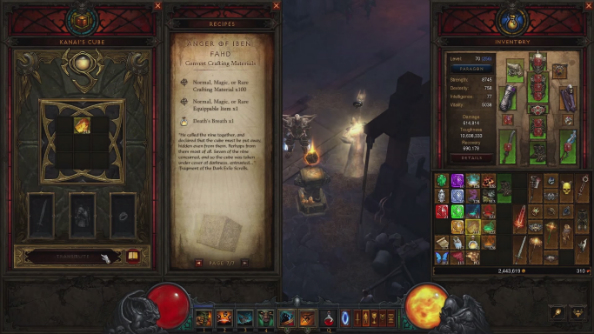 Blizzard have bestowed a sizeable new patch on Diablo 3, adding an item which allows deeper character customisation, a new area called the Ruins of Sescheron, a bushel of balancing tweaks and the like.

Let’s talk about Kanai’s Cube, the show-stopper of Blizzard’s 2.3 patch. It’s found in that aforementioned new area, which also hosts a umber of new enemy types.

Obtain it and you’ll gain the ability to extract legendary powers, reforge legendary items, convert gems to different colours and other inventory-friendly duties. Quick heads-up, though – you’ll only be able to explore the Ruins of Sescheron in Adventure mode.

The new patch (v2.3.0.33174, if you want to get technical) also sets up Season 4, which kicks off on 28 August. A new progression/reward system called Season Journeys makes its way into the game, alongside new Torment VII-X difficulty levels, which sound just delightful.

Rebalancing tweaks focus on the Witch Doctor in patch 2.3, but there are minor changes across the board. You’ll find a full breakdown of what the patch adds on Battle.net

Earlier this month a job listing for an art director at Blizzard was spotted, and it strongly hinted that there’s more substantial Diablo content on the way, either in expansion or sequel form.