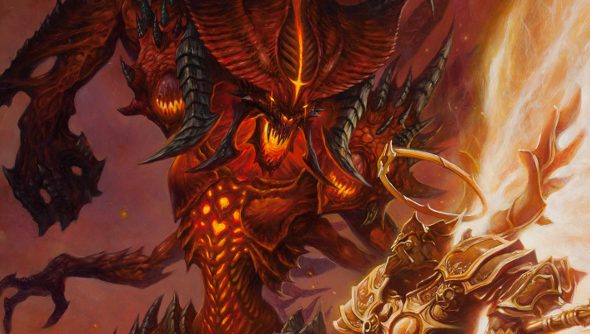 Update: It looks like Korea and Europe are safe, too. Forum posts on Battle.net show Blizzard denying that microtransactions will be implimented in the EU and the Korean/Taiwan server. It looks like the Asian markets are the main intended audience, specifically China.

Blizzard have spoken about some interesting features that may be discovered in Diablo 3’s 2.2.0 patch. Specifically, features that appear to allude to microtransactions. Before information is data mined and featured at the top of every forum web-wide, the developer decided to clarify what these features would mean.

Microtransactions are coming, it would appear. Just not in America.

The features in question are a new currency called “Platinum”, timed experience boosts, new cosmetic items, stash space and character slot expansions, and a new UI that will accommodate these new features.

Discussing the patch on the Battle.net forums, Blizzard said: “We recognize that many players have expressed an interest in microtransactions being added to Diablo III. While we may explore this model in some regions, we have no immediate plans to implement such purchases or the aforementioned features anytime soon for the Americas region.” Whilst not clarifying if this actually means microtransactions or not, it seems logical to guess that we’re heading that way in certain regions. A controversial move, especially after Diablo 3’s less-than-warmly-received Auction House.

Blizzard have gone on to offer a little more clarification to PC Gamer, saying “There are a lot of different factors that go into decisions like this, including various regional or local market considerations. We know that some of these features would be ones that players in several regions might enjoy, but we don’t currently have plans to support these in North America, and we don’t have any other region-specific details to share at this time.”

So it looks like the USA is safe from any changes, but all other regions could begin to see microtransactions appear. But when will that be?