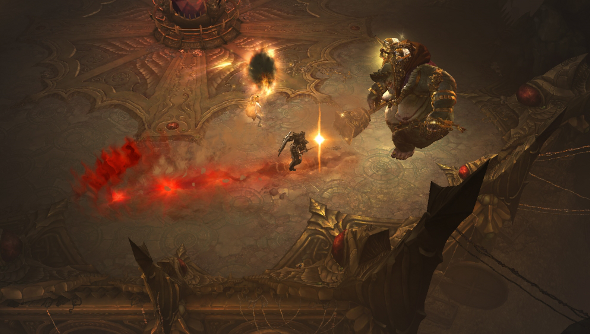 Diablo III’s craven, scurrying Treasure Goblins are enigmatic wee beasties. They appear, with their sacks of loot, and are quick to disappear through portals if they aren’t killed and their wealth stolen. Where do they go when they leap through those portals? Is there a land filled with goblins and gold on the other side?

Patch 2.1.0 finally reveals what is through the portal: the Vault.

When a Treasure Goblin is slain, a portal will appear which will give adventurers access to a realm of unimaginable wealth, all pilfered by these shifty little monsters. “The inspiration for the Vault was a mixture of a couple of things: a bee hive, the Lord of the Rings, and Scrooge McDuck’s infamous Money Pit,” said lead environment artist Richie Marella.

Different goblins populate the realm, from little worker goblins and violent goblin guards to the ruler of the Vault: Baroness Greed. And, of course, adventurers will need to fight through them to get all the lovely loot.

“The fight with Greed itself evolved fairly naturally as we played it internally,” said senior level designer Matthew Berger. “Her charge attack, for example, was initially much more straightforward: she would charge at you and if she missed she’d get stunned. To add a bit more variety we then added a second charge that had a much longer range so that she could charge all across the room sometimes and surprise the player—that then evolved into her triple charge. Initially, Greed oriented herself while preparing the charge which made it very hard to avoid, when we moved into the triple charge we had her stop doing this, allowing the player an easier time to avoid it. This coupled with the great new warning that the artists had given it was the winning formula.”

Patch 2.1.0 is getting put through its paces in the Public Test Server at the moment.