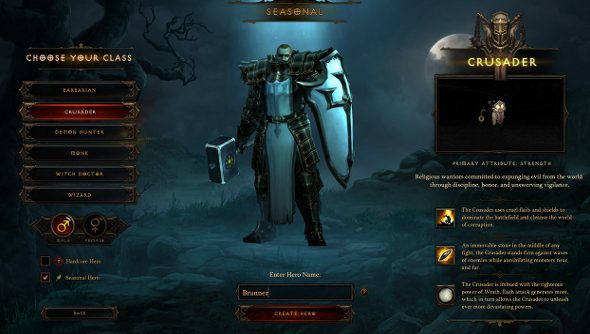 Blizzard’s already teased quite a few details on the upcoming patch 2.1.0 for Diablo III. Just the other day the source of the Treasure Goblins was revealed, and back in June the developer gave a brief overview on the new features coming to Diablo.

But now it’s time to get into the nitty gritty of seasons, where new characters can compete with each other by gathering achievements like they were sweets, all in an attempt to get a coveted spot near the top of the ladder.

New seasonal characters can be played in normal or hardcore modes, and Blizzard says that the first order of business will be to get to level 70 and get some decent gear.

Players can compete with each other by completing conquests, challenging achievements specific to seasons; hoarding achievement points; and reaching the highest tiers of Greater Rifts, which Blizzard’s going to spill the beans on soon.

Progress will be tracked via the leaderboards, and there are several ways to achieve immortality there. If you’re the first person in that season to hit level 70, your name with be etched on the leaderboard for the rest of the season. And you can check how you’re doing against other players doing the same thing, like where you sit on the leaderboard for Greater Rifts, or your achievement point ranking.

And there’s more than glory to be gained – there are rewards too. Ten new legendaries will be introduced in the first season, with more coming with each new season. They’ll only last until the end of that season, too, so there’s no messing around, putting it off like it’s work rather than a reward for slaughtering monsters.

There will be a reward for hitting the maximum level during a season as well. A new transmogrification set will unlock at the Mystic when you hit 70.

While you’ll need to start from scratch with each new season, completed seasonal characters will become regular ones, and keep all the stuff they’d earned.

Are any of you lovely folk going to be delving into season one when it launches?