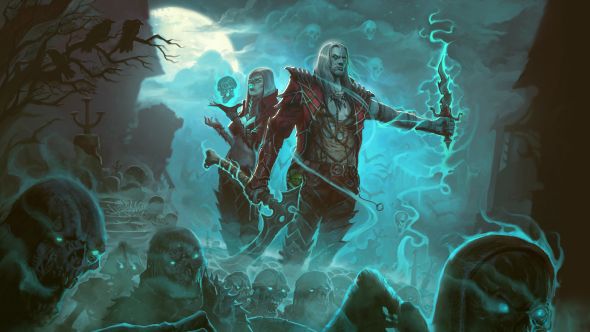 Diablo III made our list of the best co-op games on PC. Check it out for more top-notch team slaying.

Patch 2.5.0 is live on Diablo III’s PTR, so you can take it for a spin now if you fancy. We don’t know when it’s going to hit the live game, or if certain features won’t be tweaked before it does, but it’d be a surprise if any of the big new additions were roled back.

Hence it seems Diablo III’s power creep is set to continue as Legendary and Set items will now have a chance to roll as ‘Primal Ancient’ – a new class of gear that is even more powerful (and rare) than Ancient items and can roll with up to 30% better stats. Presumably, new Torment levels won’t be far behind.

The Armoury was shown at Blizzcon, and is a much-requested system to enable quick and easy gear swaps. Saving a build will “snapshot” your character’s current gear, socketed gems, active and passive skills, and Kanai’s Cube powers, for easy and immediate equipping later. You can save up to five builds per character, and can find the Armoury in the town hub within each Act.

On crafting materials, starting with patch 2.5.0, new materials obtained will appear in a separate storage tab, which can be accessed through the Inventory window. This should free up space in the shared stash.

The remaining changes are lesser balancing stuff. The Crusader has had a tweak to its Shield Glare ability, some items have been adjusted, and there are some changes for participation requirements in Greater Rifts. For a full listing of the patch notes, check the announcement on theDiablo 3 forums.