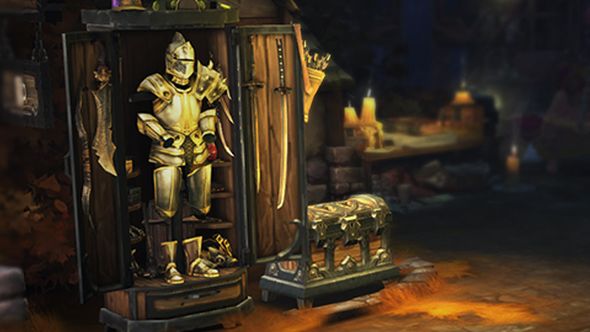 The latest patch to Diablo III, which adds an Armoury for easy-swapping of loadouts and a new level of gear to grind for with the Primal Ancient tier, is now live in the Americas.

Diablo III made our list of the best co-op games on PC. Friends who slay together, stay together.

The news was confirmed by Blizzard on the Diablo forums. The patch isn’t live on European or Asian clients yet, but it should be before the game’s tenth Season starts next Friday.

The update brings some of the widest-ranging changes to the game yet – see our earlier coverage (below) for a handily efficient summary, or head to the announcement on the Blizzard forums for a full list of patch notes.

Original story March 17, 2017:Blizzard have published some new details on the big changes coming to Diablo III in its forthcoming patch, 2.5.0. We now know a little more about how you’ll store character builds in the Armoury, and about how Primal Ancients, the new end-game equipment tier, will work.

Patch 2.5.0was revealedat the start of last month. To begin with the Armoury, Blizzard confirm that you’ll be able to store up to five complete character builds on each character.

“Any items equipped via the Armory will automatically swap to wherever the exchanged equipment was stored – whether that’s back into your stash or your personal inventory.” This includes gems, skills, runes and Kanai’s Cube power preferences. You can also name your builds. The Armoury won’t store Paragon points, so you’ll need to redistribute those.

Perhaps more significant than the Armoury, though, is the introduction of Primal Ancient gear – a whole new tier of equipment that will extend the grind for Diablo III veterans.

Primal Ancients will behave differently than other gear, however. First, they will have perfectly rolled affixes: “This means every affix including primary, secondary, and legendary are at their ideal value, whether that means the maximum or minimum value”, say Blizzard.

Second, “they will always drop with the appropriate main stat for your class (strength for Barbarian/Crusader, dexterity for Demon Hunter/Monk, and intelligence for Witch Doctor/Wizard).”

Finally, they will always have the ideal number of sockets for their item type. “For pants, chest, and jewellery, this means the maximum number of sockets,” say Blizzard. “Since ideally you will want to use a Ramaladni’s Gift on your weapon, primal weapons will roll with no sockets.”

Primal Ancients can drop from any source of Legendary item in the game, but you’ll need to have completed at least a level 70 greater rift first. You’ll need to do this once per game mode per season, but once you’ve done so, all characters in that game mode are eligible for drops.

Blizzard say Primal Ancients will “allow you to aim for that perfect set of gear”, and given that they will have perfect rolls, perhaps this means they will be the last equipment tier to be added?

Here’s the blue note in full, over on the Diablo III forum. It has examples of Primal Ancient items, plus more details on changes to Adventure mode and the crafting materials UI.