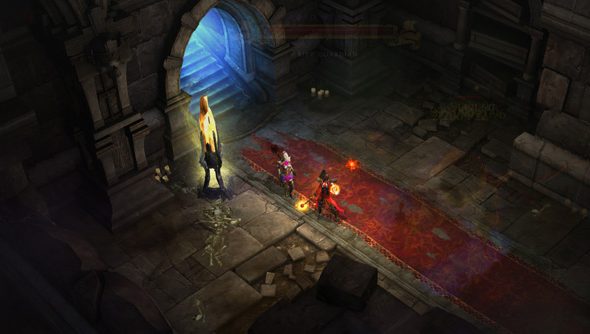 In a world where angels and demons throttle each other on the regular, things don’t age in quite the same way. In Sanctuary, ancient items don’t pale and wane or dissolve on exposure to sunlight: they benefit from stats up to 30% better than their legendary equivalents.

Ancient rarity items are just one pillar of a characteristically far-reaching Diablo III patch announced at BlizzCon 2014 – and now taking shape in the public test realm.

Diablo III is designed to be played and replayed, and ancient items are for the players who’ve done a lot of the latter. If you’ve been lucky enough to have picked up well-rolled legendaries, ancient items will allow you another tier to reach for.

Greater rifts in general are benefitting from a balance update. Rather than remove the powerful conduit pylon that’s bothered Diablo players of late, Blizzard have buffed the rest – allowing shield pylons to reflect damage and explode on expiration, and speed pylons to boost players’ knock-back abilities.

You can see the patch notes as they currently stand on the next page – and try out their changes for yourself by creating a PTR account.

In a future patch, Blizzard have plans to plonk a new zone into Rifts that might spark memories of Diablo II. Sesheron is the homeland of the barbarians (who’ve forgotten to put their teeth in, if that name’s anything to go by). Expect new monsters, including a rat king. Oo-err.

Did you know? It took just one 20-minute meeting for Blizzard to decide to close the Diablo III auction house. If only they’d had it earlier, eh?

Life per Vitality has been increased from level 67 to 70

Base Life at level 70 has been increased

Healing from Health Globes has been reduced

The presence information displayed in Clan and Community rosters, and the Friends List is now more detailed

The Clan Roster can now be sorted by offline duration

Improvements have been made to the prioritization of abilities that utilize damage shields (e.g. cheat deaths, absorb shields, and % Damage Reduction)

Movement speed increased from 15% to 25%

Cooldown has been removed

Now has 2 charges, with a recharge time of 8 seconds

Cooldown increased from 2 to 3 seconds

Increases the cooldown to 8 seconds

Now causes your primary skills to generate an additional 4 Hatred

Greatly increased the amount of Hydra attacks per cast

Damage dealt over time no longer scales with Attack Speed

Ancient items have been added to the game

The drop chance will increase with each Torment level

Philosophy note: The following changes are not intended to be a nerf to Demon Hunters or the Embodiment of the Marauder set and additional tuning may be necessary

The Caltrops, Sentries, and Spike Traps summoned by this item can no longer exceed the normal cap of those skills

Casting Cyclone Strike, Exploding Palm, Lashing Tail Kick, Tempest Rush, or Wave of Light causes a decoy to spawn that taunts nearby enemies and then explodes for 1000% weapon damage

Going back within the allowed range should resume the DoT damage

Note: Seasonal items will be available exclusively to Seasonal characters until the conclusion of Season 2

New Legendary Gems have been added

Rank 25 unlocks: While below half Life, your resistances to Cold, Fire, Lightning, Poison, and Arcane are increased by 75%

This is multiplied by the difficulty multiplier

Rank 25 unlocks: After not taking damage for 4 seconds, gain an absorb shield for 200% of your total Life per Second

Belt of the Trove

Every 6-8 seconds, Bombardment is cast on a random nearby enemy

Energy Twister periodically pulls in an enemy within 30 yards

Note: Existing items will not be affected by the following changes. Only new versions of the items will roll with the added Legendary power.

Frenzy gains the effect of every rune

Locust Swarm is cast on a nearby enemy every second

Season 2 Conquests have been added

The New Tristram town hub now has an improved layout

Note: The changes apply to Adventure Mode only

Bounties that were disabled after Patch 2.1.0 have been re-enabled

The following events have received several changes, including changes to their completion requirements

Players can no longer resurrect at checkpoint

Players now resurrect at corpse after a delay

Bloodmaw presented an unchallenging and unfair fight due to a combination of one-shot damaging abilities, stuns, and AoE damage. His Leap attack has been modified to address these concerns, but will trigger more often to make the fight feel more dynamic.

Erethon has received minor changes to his dash attack. The AoE element has been replaced with a ranged attack to give more challenge to ranged characters.

Rime was an unfair opponent for melee players. The fight has been restructured so that his AoE can no longer overlap and the duration of each has been reduced. In addition, his ranged attack should be more threatening to ranged characters.

Now reflects damage back to attackers

Duration has been increased from 30 seconds to 1 minute

Now knocks enemies into the air and deals damage to them

Be on the lookout for the Jewel Hoarder, the Blood Thief, the Odious Collector, and another Malevolent little bugger

The new Treasure Goblins can only be found in Adventure Mode