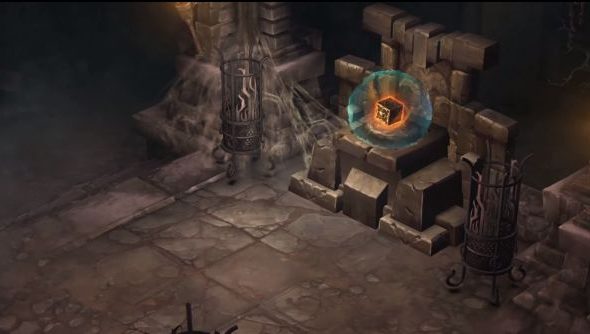 Diablo III’s continued updates since the release of its expansion, Reaper of Souls, have had an air of apology to them. I think it has more to do with the community reaction to the original game than any actual meaning on Blizzard’s part, but the size of them has been so significant it certainly feels like I’m being made up with. 2.1.0 felt almost as big as Reapers of Souls itself, while 2.3.0 is continuing that trend with a whole new zone, more difficulty levels, tonnes of new items and a huge list of changes.

In the wind up to it going live on official servers, Blizzard have released a preview of the new zone, Ruins of Sescheron (which hits a 7.8 on the Blizzard Naming Scale):

It’s the ex-capital of the Barbarians, who are more than just a class choice in the world of Sanctuary, being an entire race of burly sword swingers. It was destroyed in the opening cinematic to Diablo II expansion Lord of Destruction and this is the first time players will be able to actually visit it. Rather than an extra story chapter, it’s accessed through the Adventure Mode menu as a standalone romp.

It’s also where the signature item of this patch is to be found, Kanai’s Cube. In-lore it’s a powerful crafting tool, but for players it’s a catch-all of features for personalising your character that all sound ludicrously useful. With it you’ll be able to equip the passive effects of Legendary items without actually using those items, reroll the stats of Legendaries, turn one Set Item into another from the same set and convert gems and crafting materials into more useful ones.

Essentially it lets you use resources gathered through play to have a higher chance at loot you want, rather than relying purely on drop chances. The equipping of passives is also a significant buff to character power, to help combat the three new difficulty levels aimed at only the most elite players.

The patch is currently available on the public test realm, if you want to try it out. You can see the latest notes, updated today, here. It should reach live servers ‘soon’ (soon is a registered trademark of Blizzard Entertainment and conveys no information as to a date, time or other possible occurence of an event).