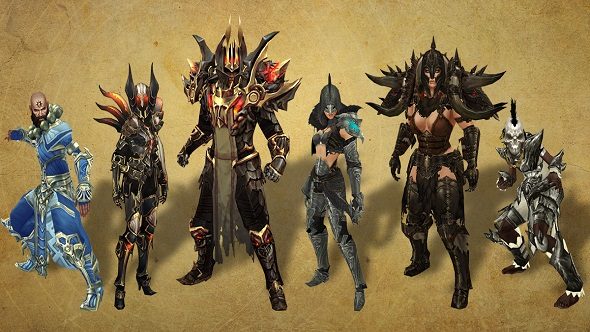 As spring has now sprung, Blizzard are starting off Diablo III’s tenth season. As a whole batch of new characters trying to climb to the top, Blizzard have added a host of new features with this season, including the return of old seasonal Conquests, new Class Sets and cosmetic rewards.

For pennant collectors, season ten adds the new Loremaster pennant based off the Book of Cain, a portrait set based off the Black Soulstone along with head and shoulder slots for the exclusive Conqueror armour set. A new season also means new Class Sets, courtesy of Haedrig’s Gift.

For those who aren’t aware, completing chapters two, three and four of a Season’s Journey will give you access to three Haedrig’s Gifts. Each gift contains pieces from one Class Set, with players only able to collect one set during the whole season. So, if you want to get all of this season’s Wizard armour, you will have to open all three of your Haedrig’s Gifts with the same Wizard character, so choose wisely. The Class Sets are as follows:

Blizzard are rotating in Conquests from previous seasons as well, meaning you can finally get those accolades you may have narrowly missed out on in the last season. Remember, only the first 1000 or so players can earn a spot on the seasonal leaderboard, so get grinding to see if there are any spots left.

For those who have yet to earn their fourth stash tabs by reaching Conqueror during previous Season’s Journeys, you can earn that extra tab by completing the following Conqueror tier tasks:

The season went live on March 31, so all of these new gear pieces and challenges are now available to complete. Get going to see if you can make Conqueror for a tenth season.