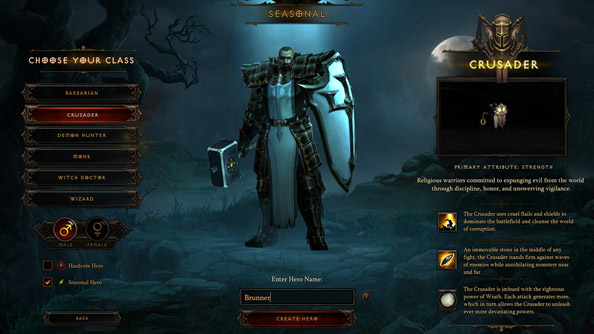 There are some who live their lives on a single plane, hacking away perfectly happily in pursuit of personal goals or plot-determined endpoints. But all around them – they need only look up! – a battle is raging between the heavens and its hind-parts.

Many Diablo III players participate in seasons – recurring runs through the game that offer not only a competitive compulsion to level, but more tangible rewards in new legendaries and transmogrification tools. Season 4 has just begun.

Seasons are a reason to start again with a new Normal or Hardcore hero – to empty your pockets of cash, items and XP and while away a weekend testing an idea for a build.

This particular season was preceded by the Diablo III 2.3 patch Phil comprehensively covered last week – which introduced a new progression system in Season Journeys, and a number of new difficulty levels: Torment VII-X.

There’s an exclusive transmogrification set put aside for everybody who competes, and new legendaries and season-only achievements up for grabs.

You can nominate a hero for seasonal play by checking the appropriate box during character creation. All seasonal heroes share a stash and artisan progression – and their currency, materials, recipes, items and Paragon experience will carry over into normal play once the event ends.

You’ve about three months to make your mark – think you might roll a new alter ego?