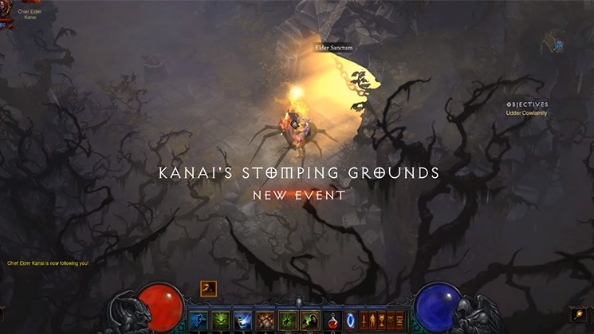 You may well have heard of Kevin Kanai Griffith. He was an artist for Blizzard who passed away in October 2014 after a battle with cancer, and his name has cropped up in tribute numerous times in Blizzard games since. The latest honour comes in the form of a secret cow level that can be played throughout this month.

Diablo 3 is one of our best RPGs for PC.

“Kanai’s Stomping Grounds” can be accessed by visiting the Immortal Throne at the Ruins of Sescheron. It was spotted by Reddit users, and is exclusive to the month of March.

“The Kanai event has actually been present since Patch 2.4.0 launched, but is only available during March – the real world birth month of Kevin Kanai Griffith, the artist for whom Kanai’s Cube (and King Kanai) is named,” explained Blizzard community manager Nevalistis on the Battle.net forums.

“For those of you who may not know, Kevin was a talented and dedicated member of the Diablo 3 development team who passed away in October of 2014 from a rare form of cancer. If you’d like to read more about Kevin, we included a short biography of his contributions to Diablo (and Blizzard as a whole) in the Kanai’s Cube preview.”

“This event is a chance for folks to get to adventure with Kanai one more time. We hope you enjoy the opportunity as much as we do.”

Alongside the Kanai Cube, Blizzard have also paid tribute to the artist with World of Warcraft NPC Kanai Griffith.