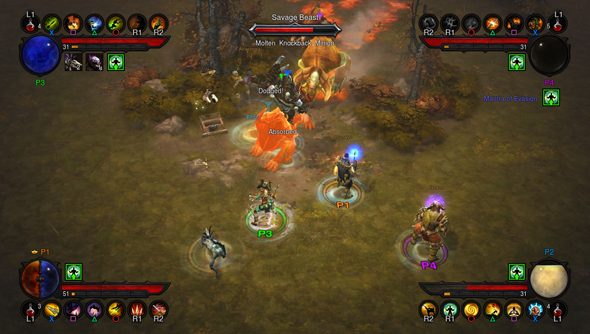 Blizzard plopped out Diablo III for consoles last year, and the king ARPG played ever so slightly better for the transition. But not only are we still missing gamepad support on PC, we’ll never off demons alongside our friends on the PlayStation and Xbox. Not on your nephalem.

Lead designer Kevin Martens told Gamespot that cross-platform play is “definitely not possible at this point with this game”.

“We didn’t build it that way,” said Martens, “so the two ecosystems are closed. I’m trying to give you the most definitive, least PR answer there is, and that is no, we can’t do that. What the Xbox and PlayStation networks do is different than what Battle.net does.”

“Seasons requires always online, and that’s one of the major differences in the ecosystems there,” explained the designer. “For seasonal conquests and things to be what they are, everyone has to be playing on the same leveled field. That’s a great example for something that doesn’t work for consoles.”

Whoever thought Diablo would have a levelling problem, eh? Arf arf. Do you know anybody who’ll get to play Diablo III 2.1.2 on a comfier chair than yours?