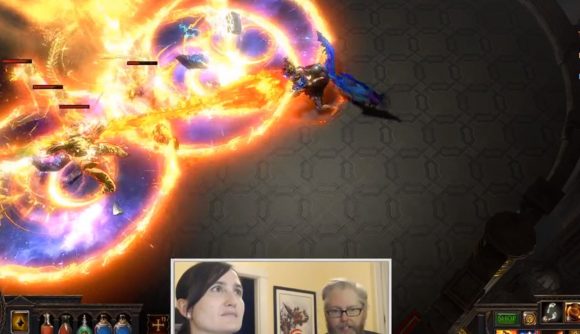 The creator of the original Diablo had some choice words for his former employer during a late-night Twitch stream. Though it actually took place about a month before BlizzCon, it has since gone viral in the wake of the furor over Diablo: Immortal, Blizzard’s mobile iteration on the classic hack-and-slash RPG, which was announced at the company’s annual festival.

David Brevik, the senior designer on the original 1996 Diablo, appeared October 5 on a Path of Exile stream hosted by his wife, Twitch streamer thejunglequeen, and went on a lengthy rant about the state of Blizzard, which he left in 2003 to found Flagship Studios.

“Overwatch isn’t Fortnite. Why have you wronged us? Okay, we’re going to get rid of the [employee] profit-sharing programme. We don’t like this. We don’t like the fact that low-level employees make decent money at Blizzard. We’re gonna get rid of this programme because we need more profits to increase our stock price.”

It’s important to note at this point that Blizzard has since told Newsweek that the profit-sharing programme – which provides pay bonuses based on games’ sales – remains in place as part of its employee benefit package. Brevik himself admitted in a follow-up interview with the same magazine that the discussion was purely hypothetical.

“I have no inside information,” he told the magazine via Twitter DM. “I don’t even know if I believe it.”

This didn’t stop Brevik from suggesting, during his rant, that the supposed termination of this programme was linked to Michael Morhaime unexpectedly stepping down as Blizzard president in October.

Thejunglequeen stepped in at this point, to make clear this was all speculation.

“Of course not! We don’t know if any of this is the case,” Brevik said. “However, you can easily imagine this.”

Brevik also admitted to Newsweek that he was a bit drunk on the stream.

“It was probably my bedtime,” he said.


Watch How do I PoE again? RF Totems! ~~ !ILB ~~ from thejunglequeen on www.twitch.tv

Despite these provisos, Brevik’s rant has become red meat for Diablo fans angry about Blizzard’s announcement of a mobile version of the game. And even though it went down a month before Blizzard announced Diablo: Immortal, it did foreshadow the negative fan reaction to the company’s move on mobile.

Prior to the announcement, he cautioned fans not to get their hopes up for a new main-line Diablo title.

“My response for months has been, ‘I doubt they will announce anything, don’t get your hopes up,” he said to a fan on Twitter October 17. “I don’t know anything about their plans, but I do know the many reasons it doesn’t make sense to announce early anymore.”