Reaper of Souls is nigh, and even Diablo III players who go without will feel palpable change once it hits. By March 24, the auction house will be gone, and a slew of new social features will hit the game. Be the envy of your friends when that time comes by swotting up on the key differences between a Clan and a Community now, and learning the precise date when the last hammer will drop at auction.

Clans are social groups capped at 120 players, but are likely to be made up of far fewer on average. They’re the centrepiece of a new grouping system designed to pull together the players you already wind up questing with the most.

They’re invitation-only – requests to join can be sent, but must be approved – and sound like simple friends lists. But the Clan Finder suggests otherwise. Using the in-game search function, found under the Communities tab, you’ll be able to filter Clans according to language and keywords. 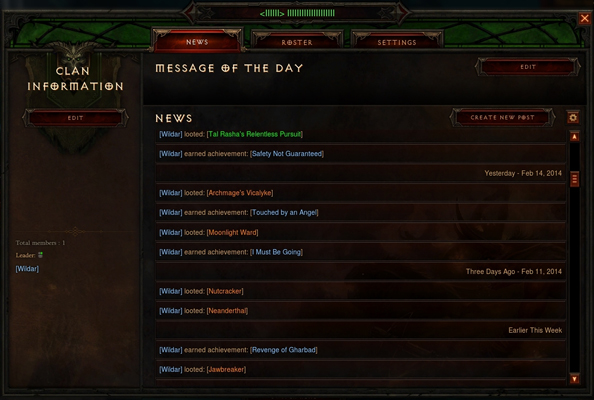 Despite all the new specifics, Blizzard point out that both Clans and Communities are “still in development” and therefore subject to change. They’re currently in testing on the patch 2.0.1 PRT and Reaper of Souls closed beta.

The next real event in Diablo’s calendar is the end of the auction house, on March 18. Blizzard issued another reminder last night, and promised imminent “technical details” on the shutdown.

We’ll hear what the house closure means for active auctions, items in the Completed Tab and your Battle.net balance next week. Will you miss it?