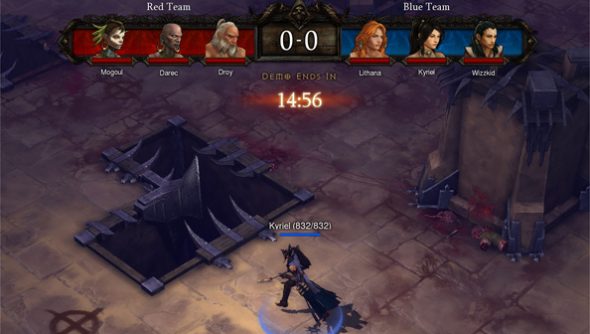 The trouble with that is that Blizzard specialise in particularly good, and so Wilson and co have decided to start again at level 1 with a new build.

What exactly was wrong with Team Deathmatch, then? The first issue Wilson mentions – perhaps because it’s his chief worry – is the relatively shallow appeal of fighting all day and all night without objectives to be completed or meaningful player choices to be made.

More wrong lay in the effect the mode might have on class balancing. In short: Diablo 3’s classes were built to be exploited for explosive effect in single player, where balancing is a funny fairy story for children. Team Deathmatch in its current form would see Blizzard forced into a new focus on multiplayer balancing that would risk destabilising Diablo’s campaign.

“We want to be able to carry over as many of the crazy runes, items, and skills as possible, with their crazy effects, and alter them as little as possible,” explained Wilson. “In a casual PvP mode, something equivalent to a WoW Battleground, this would be fine, but Team Deathmatch felt very hardcore, and it put a laser focus on class balance in a way that we didn’t think would be good for the game as a whole.

“Certainly, we’ve gotten a lot of benefits from the development of Team Deathmatch, especially in the areas of controls and combat model tuning,” he added. “But at this point we don’t believe it’s the experience we feel it needs to be in order to ship, so we will be shelving it for now and exploring other options.”

A vague new course for the Diablo dev team has already been set. Duelling is scheduled to release in patch 1.0.7 early this year, with more details on that particular brand of PvP promised sharpish. Beyond that, Wilson and friends will fiddle fundamentally with Team Deathmatch until it becomes something befitting of its parent game. Then and only then it will be released as a free update.

“Team Deathmatch provided us with the foundation that we needed and served us well,” concluded Wilson. “Hell, it may even still be added in some form in the future. For now, though, we’re going to first be looking at new modes that play up to the strengths of the character classes, focus on objectives beyond just defeating other players, and possibly even integrate PvE elements and rewards.”

Okay. Are we happy about this? Might we say, on balance, that this will wind up a Good Thing?