Blizzard’s talk of fixing loot and a new approach to their end-game is nice, but the meat of the Reaper of Souls expansion pack is in the new campaign act, and the new character class. Both are playable at Gamescom. So I did.

The Crusader is essentially bottled lightning. He’s a melee fighter that can fling and punch golden magic at anything that moves. He plays somewhere between a Barbarian and a Monk, but not quite like either of them. Whereas the Monk will dash between monster packs, the Crusader stands his ground, throwing down healing circles, using a shield block to stun an enemy pack, before leaping into the sky and dropping down with an almighty crash; a human meteor spell.

His weakness, if he has one, appears to be closing the distance to ranged characters; the demo on the show floor wasn’t hard by any stretch – it was almost comically easy – but I did notice that smashing the faces off steady streams of skeletal archers was proving slightly tricky.

Better, though, was the campaign itself. The town of Westmarch, that you’re fighting through, is a darker place than anywhere we fought through in Diablo 3. It’s essentially Diablo’s take on a gothic, European city, one that is under attack from necromancers and armies of dead.

The citizens are almost constantly being converted into undead slaves. And that includes the children – I was slightly taken aback when a family, including a little boy, were killed, warped, and then started trying to eat my face. So I punched them really hard until they exploded into loot. I also spotted monsters actually fighting other monsters – a new little tweak for Diablo 3’s AI menagerie. 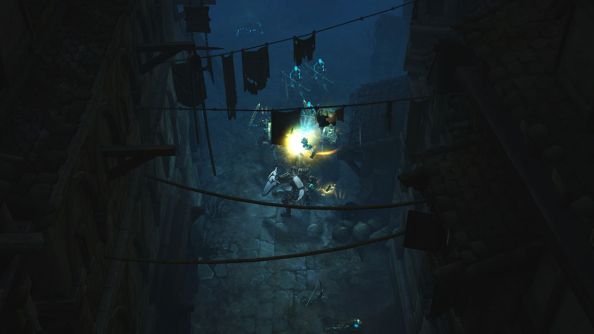 There are other tweaks. I’m almost certain the drop rates will be tweaked in the final game, but significantly less blue loot dropped in my run through – just a few junk pieces in about a quarter of an hour of play. However, I was more consistently finding more gold items, and one legendary appeared. By the end of the 15 minutes, I was wearing eight pieces of found loot that were all upgrades, and some were upgrades of upgrades. It was exceptionally fun.

I’m a fan of Diablo. I think the game, after a year’s worth of patches, has gone from being good to exceptional. Reaper of Souls is more of that, but a further step up in quality.