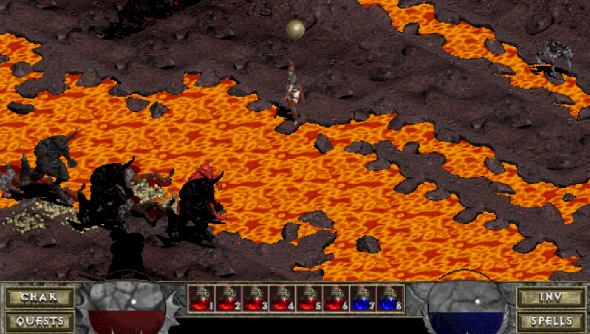 Y’know that Diablo, that pioneering action RPG that we all know and love? It turns out that the game that inspired so much went through a quite radical reinvention, with the end result remarkably different to the original concept.

As I chatted to designer David Brevik about the forthcoming ARPG Marvel Heroes, the former co-founder of Blizzard North explained that the real-time action and the groundbreaking multiplayer were never part of the team’s vision when the project began.

“Diablo, originally, was a single-player, turn-based DOS game that evolved into real-time action roleplaying,” he said, also explaining that the game’s mulitplayer component (one of my very first experiences of online play) was only added towards the end of development when the team came up with a rather interesting idea.

“We made up Battle.net six months before the end of [development on] Diablo 1,” he said. “The idea of it came six months before the launch, so we went back and we made Diablo multiplayer.” Wait, I asked, did one of my formative experiences of online multiplayer come about almost by accident, as an afterthought? “Yeah, absolutely,” Brevik said.”But it was a great idea, that’s why we did it!”

Battle.net was the first online gaming service to be built into a game itself and, after debuting with Diablo, it was included in StarCraft and become a major contribution to that game’s success and enduring appeal.