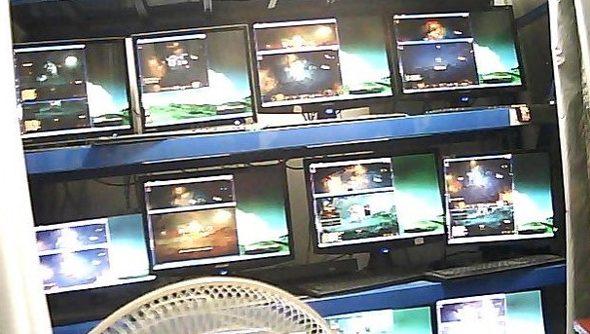 I’m not sure when or from where the mental image crawled into my brain, but I’ve got a firm impression of what a Chinese gold farming operation looks like. The lighting and decor is that of an after-school youth centre somewhere just outside of Croydon, where a few dozen gaunt, shirtless teenagers sit emotionlessly in front of a bank of identikit PCs. Well as it turns out, if these photographs of an actual gold farming operation are accurate, this picture is all wrong.

The Horizon investigation-esqueimages were spotted on China’sBaidu Tiebaforum (which islike their version ofalternate internet-verse where Google Plus was a success)by Reddit users, whereit’s claimed they show a Chinese gold farming operation in action.Turns out there is no phalanx of clicking Chinese boys, those guys cost money, drink water and take up space. It’s obvious when you stop to think about it for just a moment: every instance of the game is being run not by a player butby a faceless bot, one carefully tailored to maximise gold output per inhuman hour. Each machine appears to be running at least seven of these bots, and roughly 30 machines can be seen in one photo. That’s at least 210 instances of Diablo 3 running on a single shelf. Redditor kallell speculated on just how much cash these farmers could be earning; a paraphrased and conservative estimate follows: “A well tweaked and geared bot can farm Sarkoth at 500k a hour. With 210 instances that’s 105 million gold per hour. One million gold can now be purchased for around $1.40, meaning these bots are earning their owners $147 per hour.” That’s the low-end estimate too, with some bots earning even more and gold prices having been even higher in the past. At one point, guesses kallell, this operation could’ve been raking in thousands of dollars per hour. The sketchy maths very loosely tallies with the claims of this Diablo 3 gold farmer, who claimed to be collecting 60 million gold per hour using his own network of bots. Removing the human element from gold farming, that sad legion of claw-handed, underpaid teenagers, scrubs some of the ethical muddiness from the practice. It’s still massively shady of course, with Blizzard stamping it out at every possible opportunity. Last month they banned thousands of illicit Diablo 3 accounts. Who knows how long a set up like this one will remain feasible?