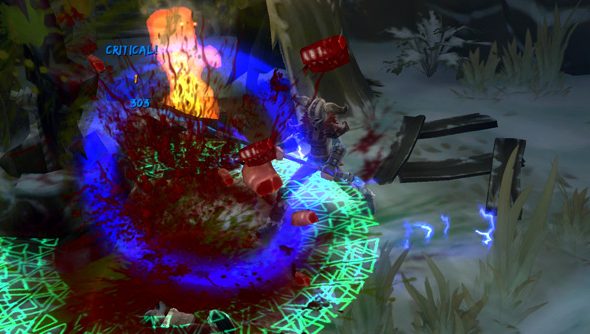 Having never owned or driven a car, I’m not sure what it’s like to own or drive a brand new one. I have even less of an understanding of what it might be like to go from driving an automatic to a manual, but I’m going to take a risk and say that coming out of a 100+ hour Diablo 3 binge and starting a new game of Torchlight 2 feels just like that.

Torchlight 2 makes you spend your stat points all by yourself. I’d almost forgotten Diablo 3, like a doting mother, was doing that for me. In Torchlight 2 you can inject every available skill point into just a couple of abilities, or spread bet across a few more. It speaks to Torchlight 2’s build-diversity when at one end of the scale exists a ranger who can summon the finest purple deathbat but can’t fire an arrow more than six feet.

But it’s still too early to say thatTorchlight 2 is necessarily better than Diablo 3. They’redifferent enough that both can peacefully co-exist without a gold medal having to be awarded either way, but Torchlight 2 so oftengets right what Diablo 3 gets wrong,and so far it’s very, very good. So here’s a bunch of reasons why Torchlight 2, post launch-day honeymoon periodmight be the more wonderful action RPG of the two. Of course, Torchlight had pets, but they’re better this time. For one, the variety of pet types has been widened to include ferrets, hawks, wolves, tiny dogs and something called a Chakawary, which is like a cross between a turkey and the dinosaur that kills Dennis Nedry in Jurassic Park. Pets have their own adorable little backpacks, which can be used to dump junk loot in as you play before sending them back into town to sell it all. Further removing the need to interrupt a dungeon crawl is the new ability of pets to purchase potions and scrolls on these dutiful runs back into town.

They’re also a smidge more aggressive, with collars and tags improving their abilities and generallybroadening their usefulness in combat. Right now, my papillon‘s wearing a rare tag that steals health from enemies on hit and transfers that HP to me. He can also shoot fireballs and transform into a spider. Pets are fascinating, complex, useful, loveablethings, far more so than the tepidcompanions Diablo 3 offers.

My level 16Outlander in Torchlight 2 already looks more impressive than my level 60 Monk in Diablo 3. It took dozens of Diablo hours before my weapons began to visibly shimmer and sparkle, and even longer to discover my first scrap of legendary loot. In Torchlight you’ll be drowning in the stuff within minutes: earlybosses eject spumes ofunique and rare weapons like they’re going out of fashion. Chests spoof out their cargo like exploding mushroom spores, littering the floor with gold and metal and leather waiting to be collected. It’s exciting and gratifying to the point of exhaustion. Early in the game, you’ll be swapping weapons every ten minutes as better and better loot falls at your feet.

That said, playing so free and easy with the good stuff can lead to diminishing psychological returns.Diablo 3 is better at delivering a studied, laser-focused thimble of dopamine each time a yellow item springs from a chest, just through the relative rarity of the things, andI can’t see myself ever being as excited about loot as when I’mchasing Diablo 3treasure goblins like a desperate madcrack addict.

Even the process of identifying unidentified items is geared towards scratching a gambling itch: in Diablo 3 you’re made to wait a needless one and a half seconds before your loot is revealed. In Torchlight 2 these items are identifiedthe instant youclick, which is probably better for your mental health but feels vaguely less magical. On the upside, I’ve got a giant staff in Torchlight 2 that crackles with elemental lightning, and Diablo 3 never gave me one of those. Torchlight 2’s openish world is full of strangeness and surprise. There are creatures who, when defeated, turn into portals to odd challenge rooms, in which defeating waves of increasingly tough enemies unlocks tiers of increasinglyresplendenttreasure chests. There are mysterious altars and arcane ceremonies to be interrupted, catalogues of side-quests to be discovered and undertaken. There arecaves and demon-holes and spider-pits. There are objects in the world whose purpose remains a mystery to me. I found a bucket above a pitin a slaver’s basement which, when clicked on, demanded that I “put the lotion in the bucket”.

I didn’t have any lotion.

What would’ve happened if I’d had lotion? Where do I get lotion? Was it just a joke? Does the lotion exist?I made a mental note to come back to a bucket.

Elsewhere in the basement were trapped mages and one enchanter – little furry chaps who’ll imbue an existing weapon or item with a random bonus. Perhaps it’s just the novelty of the first few hours with a new game, but Torchlight 2 surprises memore than Diablo 3 does, with these unexpected encounters and lively dungeons. Blizzard appears an inflexible juggernaut when compared to the Runic ideas factory, andTorchlight 2 appearsa braver and more adventurous game for it. I’m unfairly cherry picking the biggest distinctions between Torchlight 2 and Diablo 3 here, with the caveat that I’ve yet to truly scratch the surface of Runic’s game, but one of the clearest and most immediate differences between the two games is in animation – and you only need minutes to appreciate that. Namely, the animation of your character, the collection of pixels you’ll spend hour after unthinking hour staring at, who will carry and actually useyour equipped weapon to smash, stab or shoot mobs.

See, Diablo 3’s left click typically triggers a skill, which in many cases is an animation that doesn’t involve your equipped weapon. Torchlight 2’s left click is a (very visual)weapon-based attack, which makesfinding a powerfulnew shotgonne or giant swordall the more interesting. It creates a tangible relationship between your character and your loot, weapons are no longer simply invisible containersof stat bonuses and perks, they’re the object you’re doing allyour murdering with. That’s immenselysatisfying, and makes loads of sense. I’d forgotten how disappointed I’d been when my Diablo 3 Monk would forego the lovely newstaff I’d just spent a chunk of gold on to instead smack things with his palms.

This attention to detail also extends to your pets, who poke about the world sniffing at thingswhenever you stand still for a while. Runic’s game is openly, delightfully cartoonish, in contrast to Blizzard’s dark (though apparently not dark enough for some)fantasy grit.Torchlight 2 is the Spongebob to Diablo’sJacques Cousteau, andI love them both in different ways.

Of course, there are more reasons why Torchlight 2 might be better than Diablo 3 (multiplayer andmodding tools are biggies),as many asthere are reasons why it might not be. But given that it’slaunching on Steam in a matter of hours, it’s by farthe most intriguing, novel, content-richand exciting action-RPG currently on offer. Get it pre-loaded – at the very leastyou’ll struggle to not find £14.99’s worth of enjoyment.