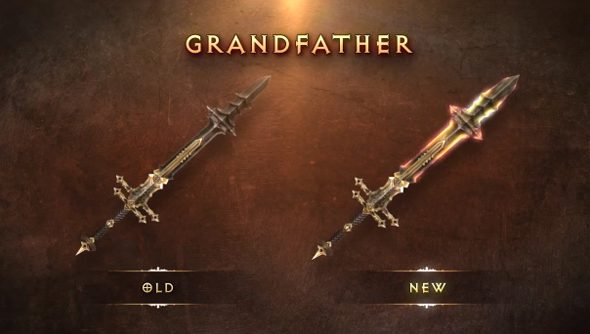 Legendary items in Diablo 3 are about to get a whole lot more interesting in patch 1.0.4, as detailed in the latest Blizzard blog. Over 50 of the new legendaries will carry custom effects previously reserved for rare monsters: stuff like shielding, summoning minions, fire chains and enemmy charming, as well as unique, flashy in-game models. Essentially, legendaries are finally going to become special, potentially game-changing items, rather than swords with a bit of posh text at the bottom. This is one of the biggest, most exciting changes to the game since launch.

The blog directly compares old and new versions of existing legendary weapons. Some of the new effects, such as huge increases to the barbarian’s spear-chucking abilities, effectively transform melee characters into ranged ones. Similarly, the legendary Fragment of Destiny wand will buff a Wizard’s Spectral Blade attack enough to turn him into an effective melee fighter.

Also mentioned are items with interesting passive effects, such as the Goldskin armour that gives 100% extra gold from monsters while creating a chance that those monster will drop gold with each hit rather than on death. The trade off is that Goldskin will never have any core stats. All of these changes will only effect new drops, meaning any legendary items you’ve got at the moment are old hat.

Here’s a look at the new designs in action. The patch 1.0.4 release date was revealed by Bashiok to be some time in the fourth week of August.